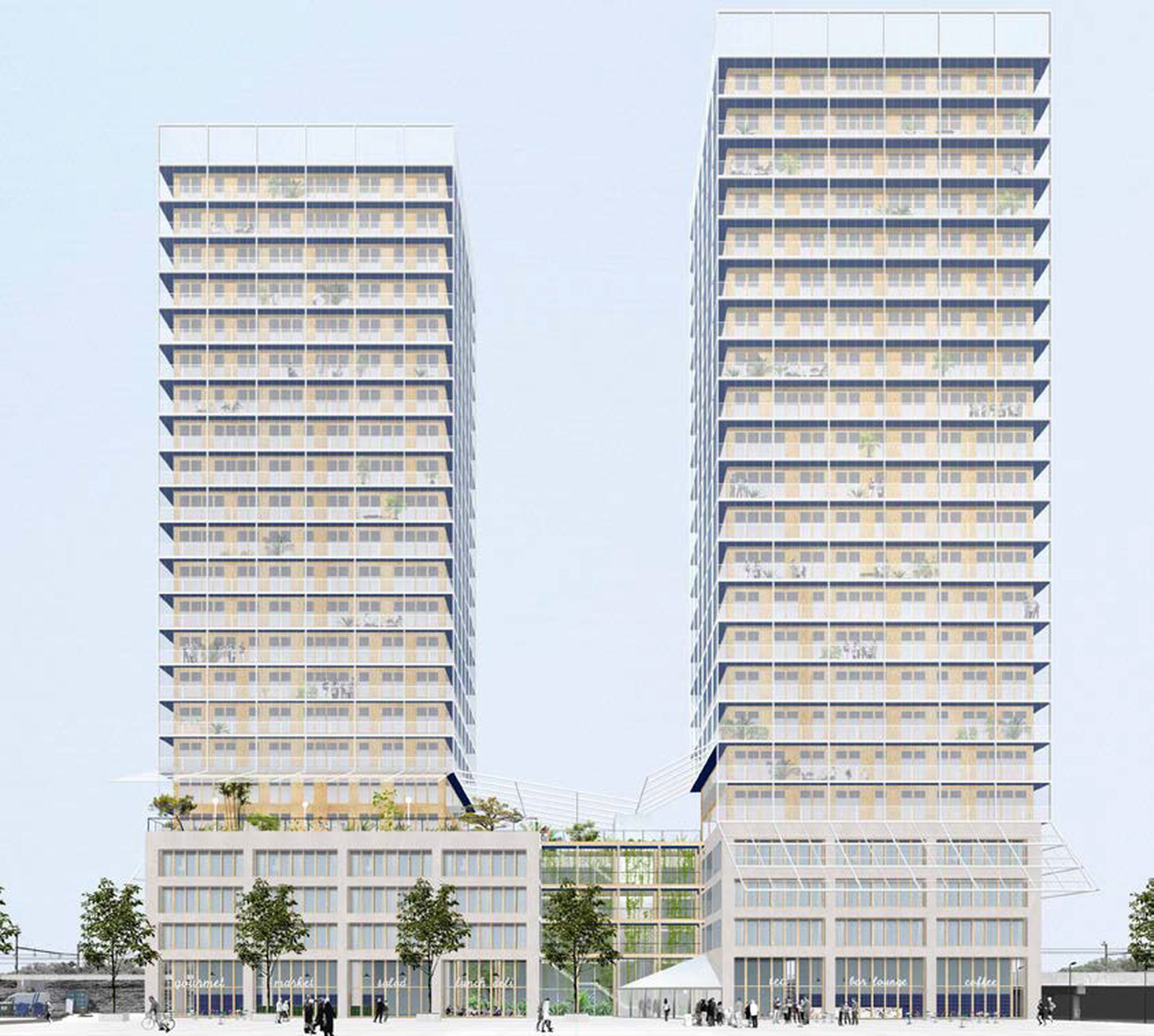 The current parcels along Koning Fabiolalaan will undergo a radical transformation in the future. Currently this is a relatively sterile neighbourhood, with many office buildings. In the future, this will hopefully become a lively and vibrant city district, with a mix of residential dwellings, offices, and commercial and public amenities, including a new school building. The most eye-catching project on this urban site consists of two high-rises, which were called the Queen Towers for many years. Now that property developer Triple Living has acquired the project, partnering with Groep Caenen Capital Fund for the project, it has been renamed Stationstuinen. A new architectural design has since been created for these volumes. The architectural firm OFFICE Kersten Geers David Van Severen has joined forces with Bontinck Architecture & Engineering for this. 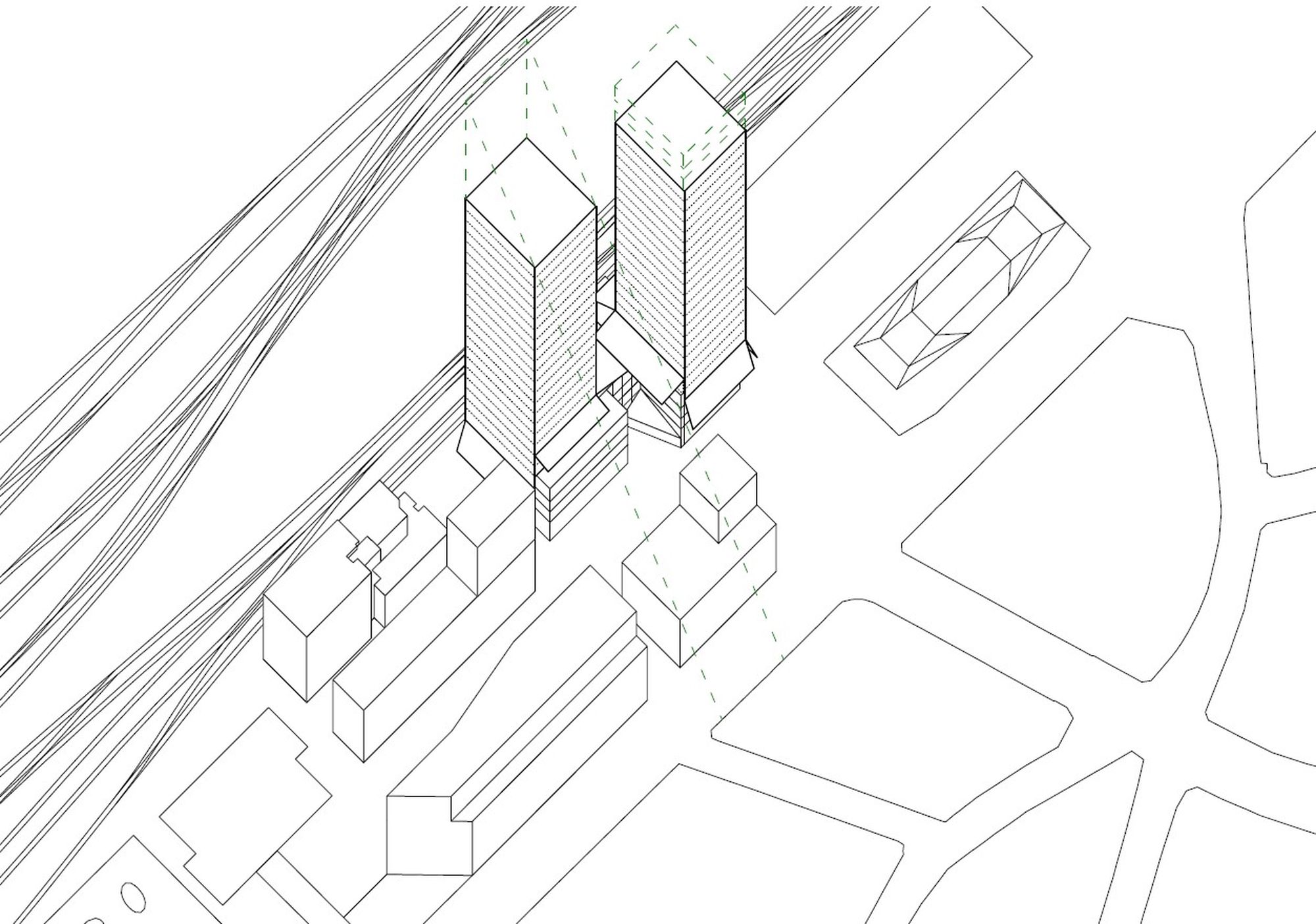 Urban robustness for the building’s base

The project designs feature two slender volumes, that share a 16-metre base. The architects purposefully chose an urban visual language for the base, with a robust design using architectural concrete, that is cast on site, in which the imprint of the wooden formwork panels is still visible.

“The base’s urban character is perfectly suited to the public function of this part of the building. This is where the large food court and the hotel will be located. It will become a meeting place for the occupants, the nearby residents and world citizens. As such, it also reflects the contemporary urban dynamic” the design team.

Large windows and a ceiling height of up to 5 metres create a sense of openness, with which the designers also emphasise the building volume’s public character. The large roof gardens on top of the base and the lovely courtyard garden on the ground floor, which serves as an entrance hall and central circulation for the hotel, are green eye-catchers.

The two slender residential volumes, which have a welcoming, residential look and feel thanks to the wooden façade and joinery, sit atop the base. The double glass climate façade, with its slender steel profiles, that wraps around the flats, is a distinctive and typical feature of the project. The glass façade has been placed over the building like a bell jar, extending into canopies on the lower level, which have both a practical and aesthetic purpose. The architects devised these canopies as an ingenious response to the wind shear that is so typical of high-rises. This creates a pleasant climate on the street level as well as in the roof garden. Moreover the canopies form a cover, under which residents can enjoy their communal roof terrace, sheltered from the wind and the rain.

The glass climate façade also protects the residents’ private terraces, creating winter gardens that can easily be converted into open terraces thanks to the glass sliding doors. These winter gardens have a threefold purpose: increase the building’s energy performance, enhance residents’ comfort and extend their living space. The winter gardens, in addition to the large rooftop garden and the lush courtyard garden, inspired the project’s name, i.e., Stationstuinen or Station Gardens.

“The name Stationstuinen was chosen because this is such a green project. The rooftop garden is the beating heart of both volumes. We will plant large shrubs and trees in this garden, so that the new residents can enjoy a view on green areas, even though they live in the city centre. The glass façade, that is draped around the flats much like a dress, transforms the private terraces into outdoor rooms or winter gardens, where the residents can also enjoy outdoor living during the other months of the year. They also act as an additional, insulating buffer, again the cold, the wind and noise.

We expect and hope that the greenhouse climate that is thus created encourages residents to plant plenty of flowers and plants in their winter gardens, creating a green ripple effect across the façades”, the design team.

Mobility is a special point of attention in the master plan of Project Sint Pieters. The development must be largely car-free. The use of cars must be discouraged as much as possible, in favour of walking, cycling and car sharing. The design of Stationstuinen also pays a lot of attention to mobility, especially for cyclists. The site will have 800 bicycle parking spaces – most of which are covered and secured – , in addition to bicycle lifts and a high-tech bicycle robot. Residents will have access to the three-storey underground car park, under the ground floor level. The entrance is at the rear, away from the expansive Esplanade at the front, where the food court and the hotel are located.

“We have included approximately 800 bicycle parking spaces. The majority of these spaces are covered and secured. They can be used the residents and passers-by. Bicycle lifts transport your bicycle to the first floor. If you have an expensive bicycle and you want to store it securely, you can use the innovative bicycle robot, a built-in, 16-metre bicycle silo that will automatically park your bicycle.” the design team. 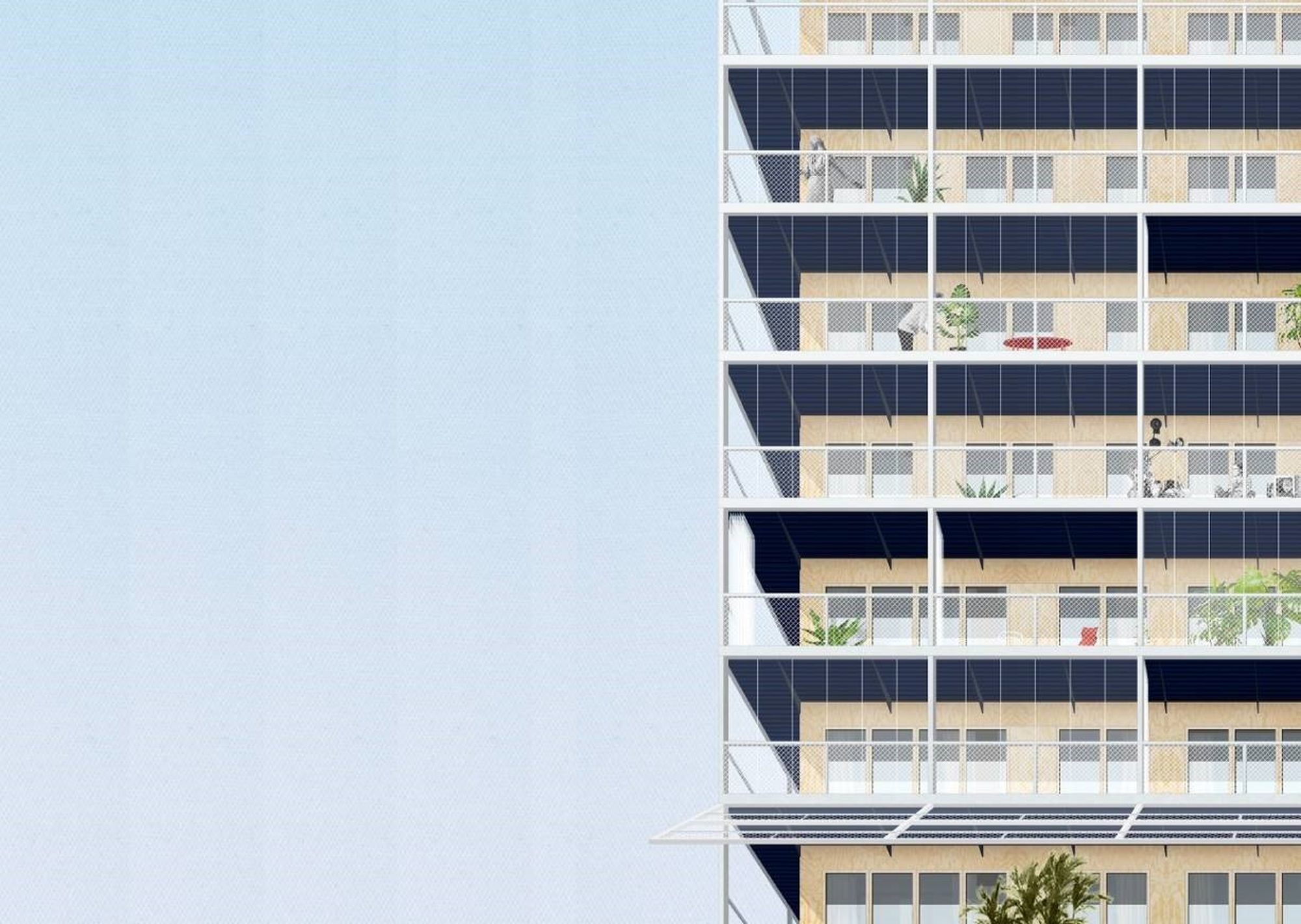 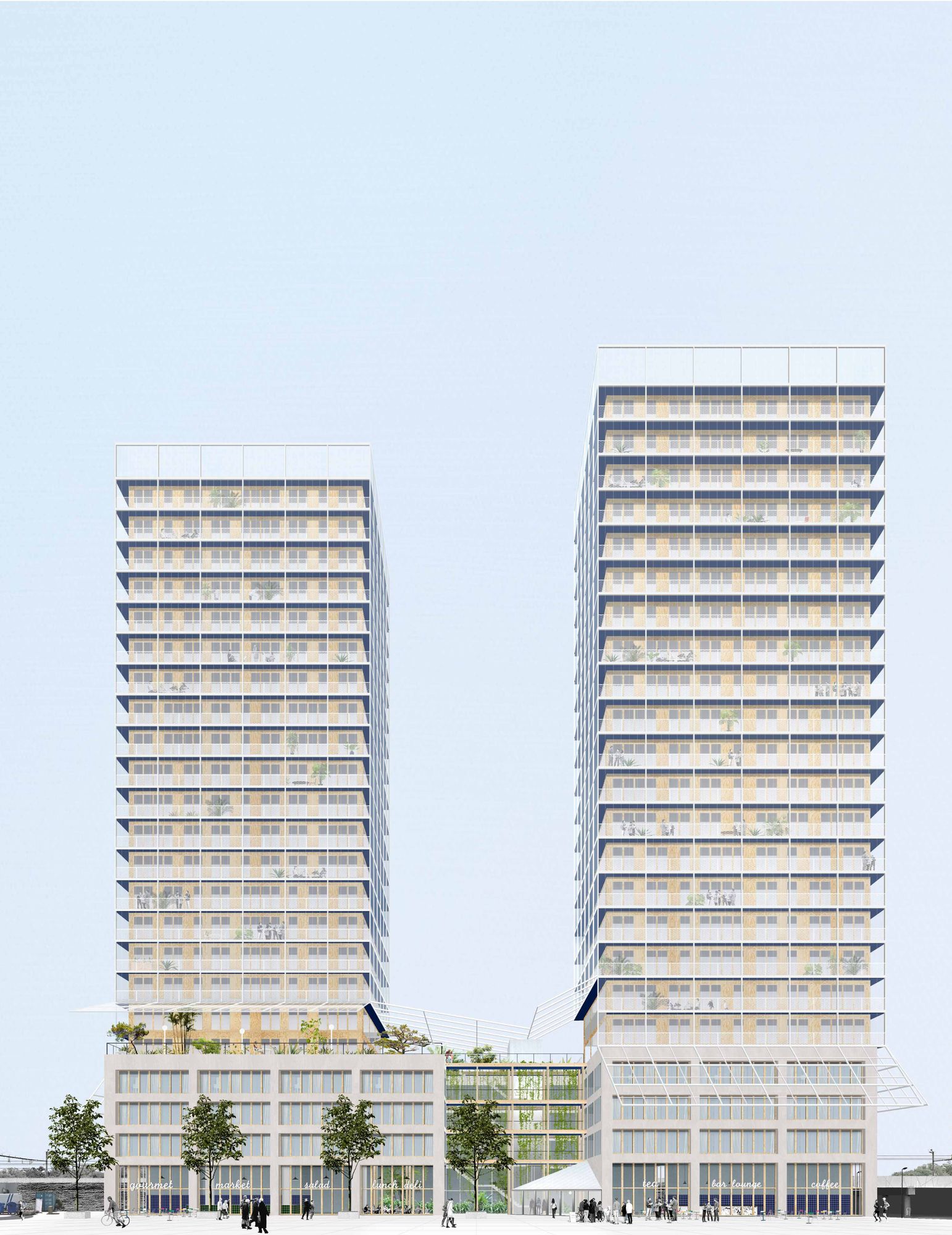 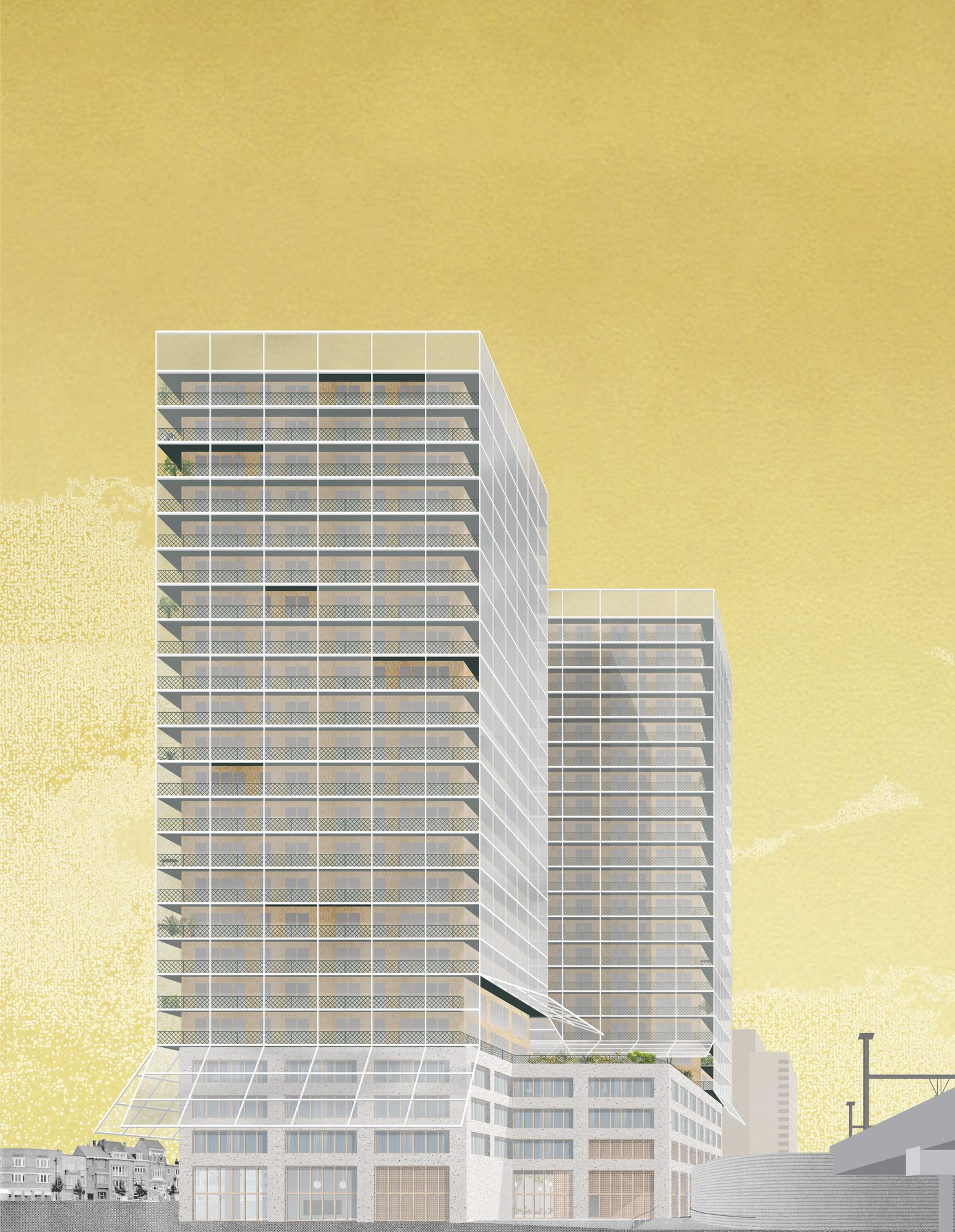 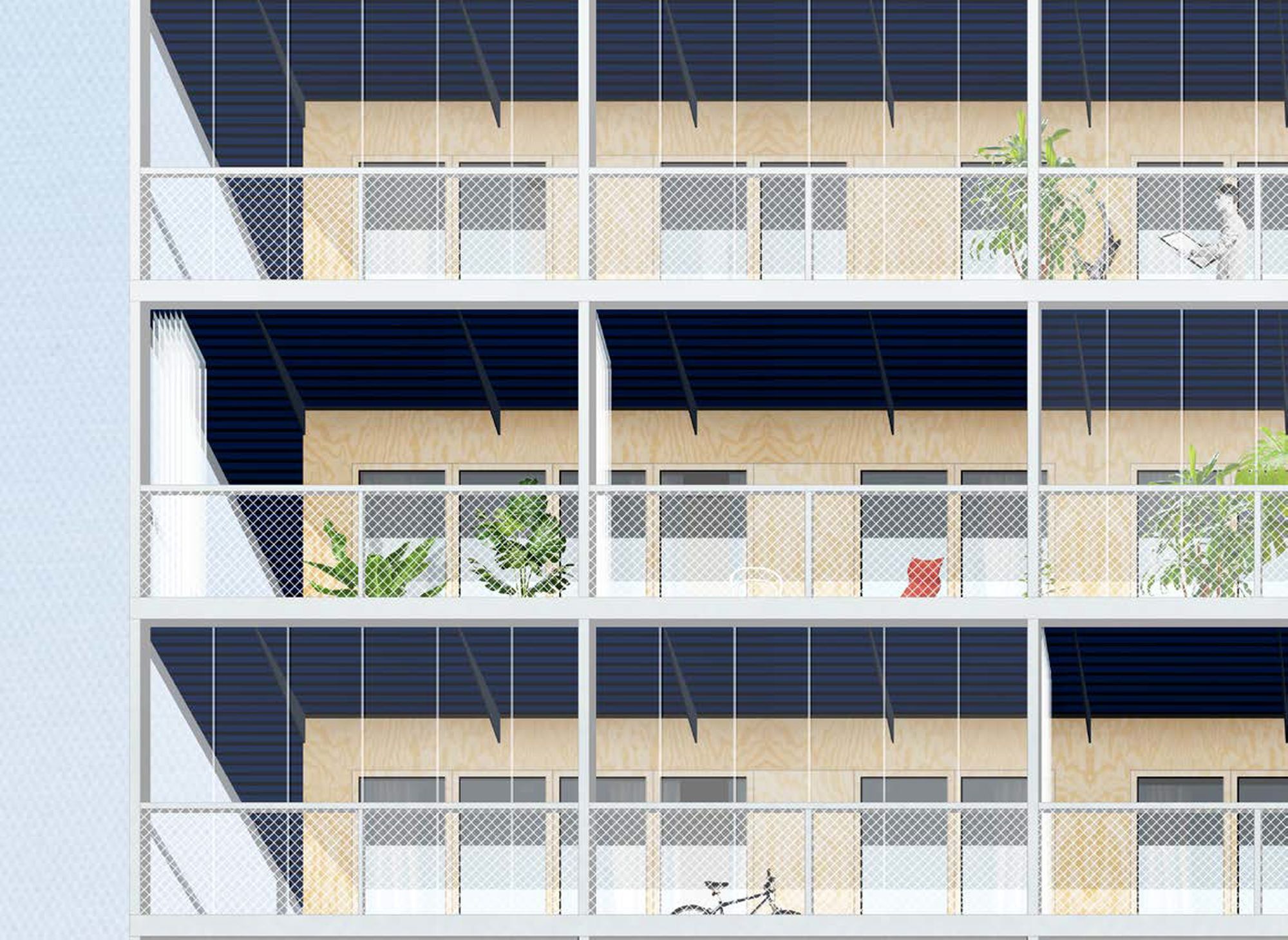