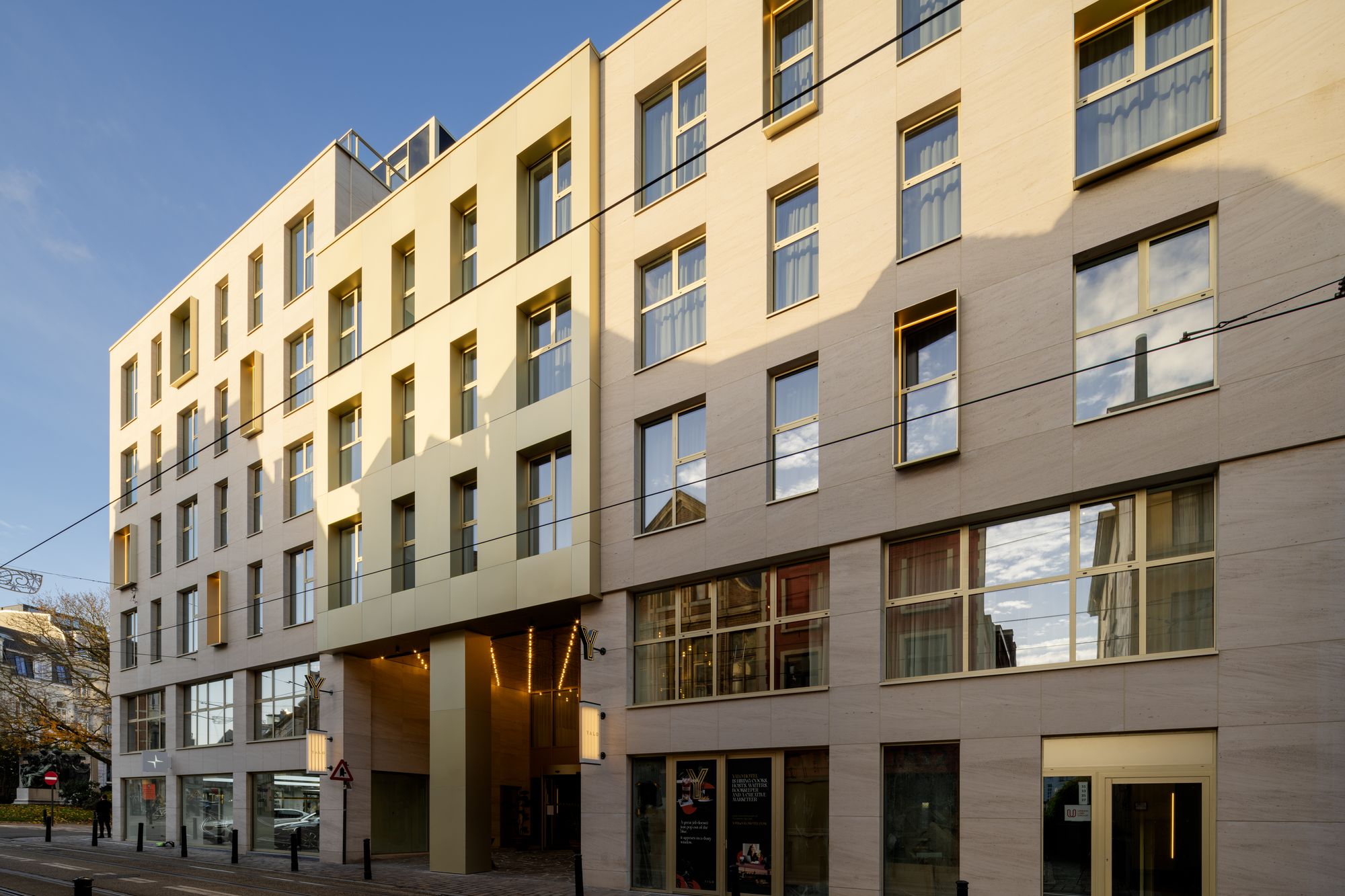 The project will be housed in the building comprising the “De Braempoort” shopping centre. This vacant building was considered a blemish in the convivial city centre of Ghent. Considering its central location the building’s function as a hotel and meeting point, in combination with its modern architecture, will be of considerable benefit to the neighbourhood.

The foundation for the building’s design is its existing architecture, while the rooms have been optimised to enable them to fit within the grid created by the columns. This resulted in a stark pattern of evenly spaced façade openings. With regard to the façade, we opted for a stately, massive façade in natural stone that is well suited to the atmosphere of Brabantdam and de Kouter. To prevent the building from resembling a single, massive block of concrete, the façade was visually split up. This effect was created by finishing the central entrance block in brass-coloured aluminium, a shade that is also reflected in the joinery. Vertically speaking, there is a distinct demarcation between the pedestal in which the retail spaces are located and the floors above it that contain the hotel rooms. The building’s pedestal consists primarily of glass to create more openness towards the outside world at street level. The whole will be given a certain lightness so that the storeys above will appear to float.

In contrast to the original building a decision was made to keep the façade stark and uniform. This is only broken subtly here and there through the addition of aluminium frames around the windows that serve as protection from the sun and by playing with the various types of window combinations. Generally speaking, only three materials will be used: natural stone, brass-coloured aluminium and glass.

The original recessed wooden top floor was removed and reconstructed entirely in glass. This storey at the very top of the building resembles a crystal crown. Thanks to the reflecting properties of the glass the roof structure does not detract from the rest of the building when viewed from one of the adjacent buildings. Together with the parapets, which were executed in glass and without edging, the building makes it mark on the skyline of Ghent as a subtle gem.

The building contains 94 hotel rooms, of which 10 are deluxe penthouse suites with terraces. There is an extra-large corner room on each floor. The remaining rooms are all intended for double

occupancy with enough space to accommodate king size beds. The sixth floor will feature a big terrace with splendid views of the surrounding area. Space will be allocated for offices on Floor +1 and conference rooms will be realised in the duplex floors of the gallery towards the back which will be let to start-ups etc. The ground floor will offer space for two shops and a lobby will be housed in the gallery. The lobby will function both as a conventional hotel lobby with a restaurant and can also be hired for small events. The lobby will be a genuine gathering place for both the residents of Ghent and the hotel guests. 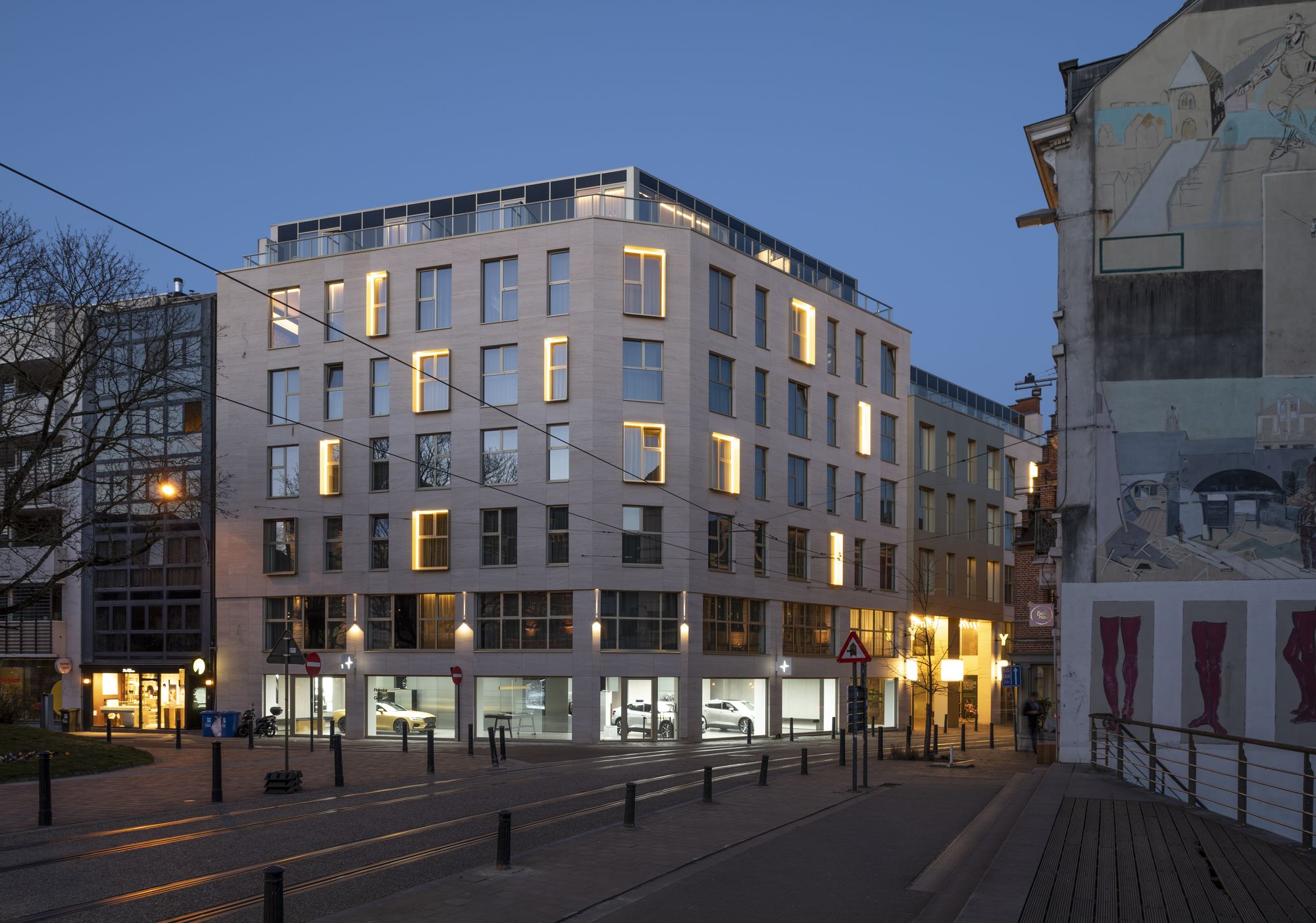 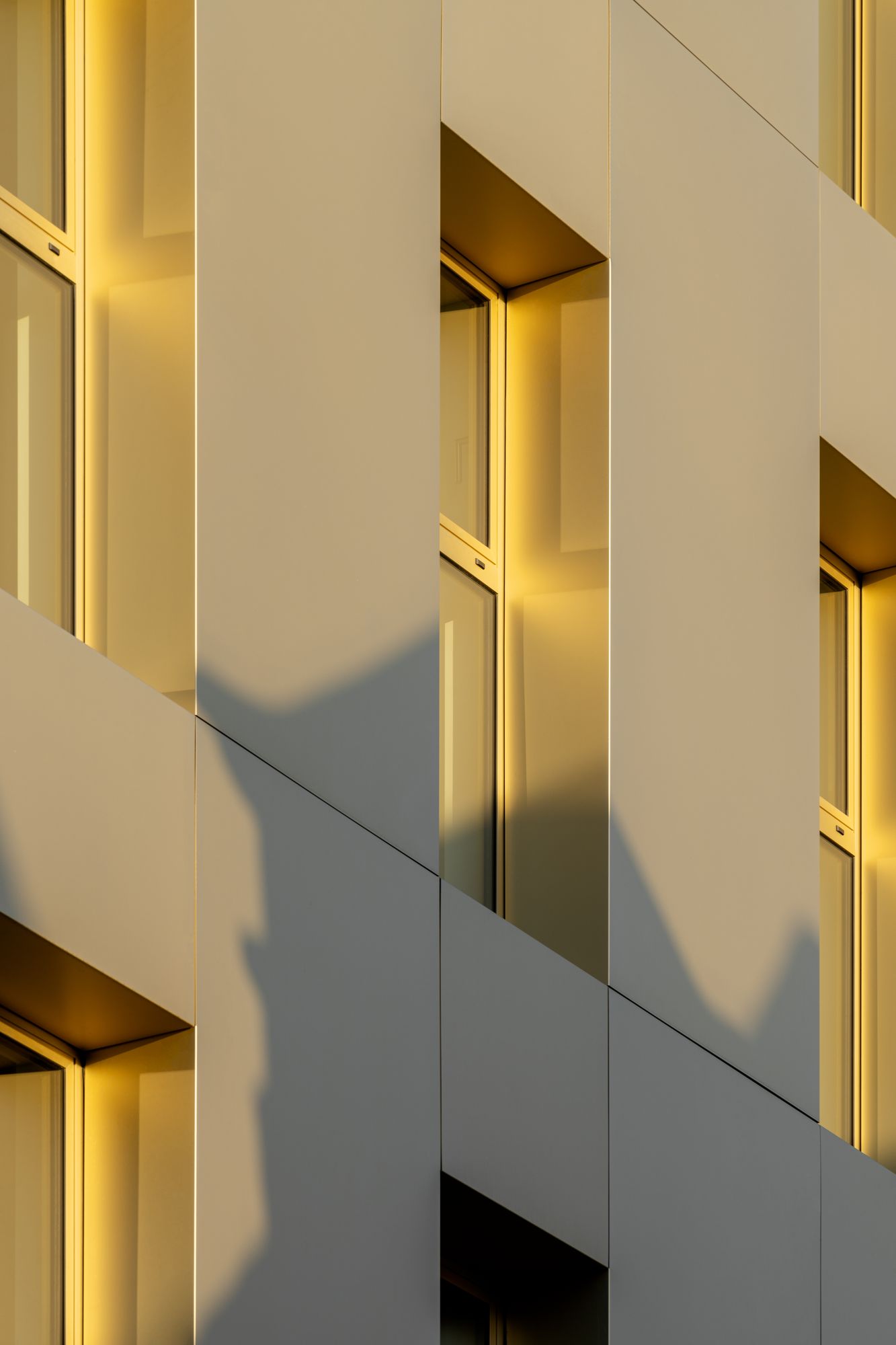 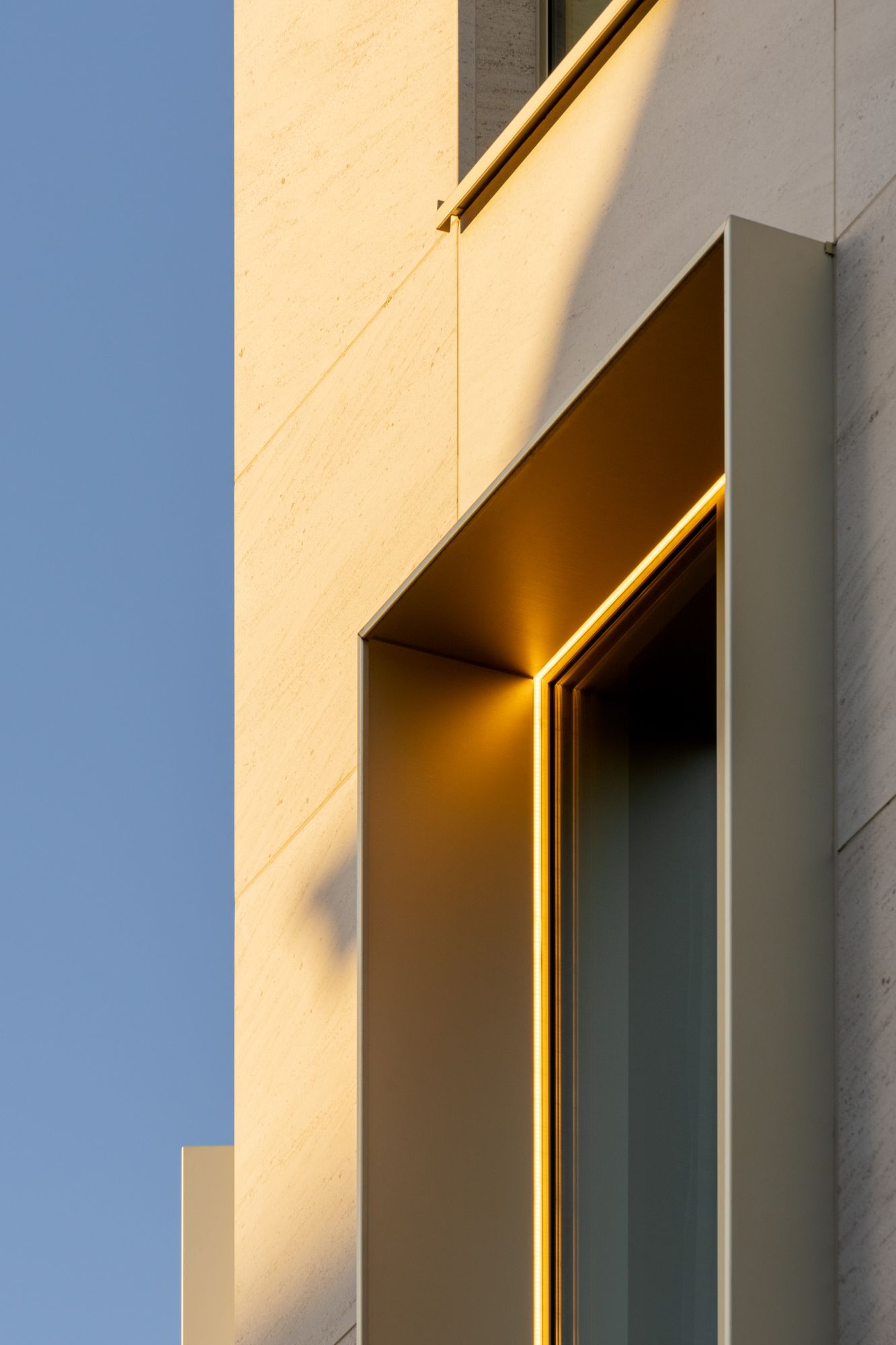 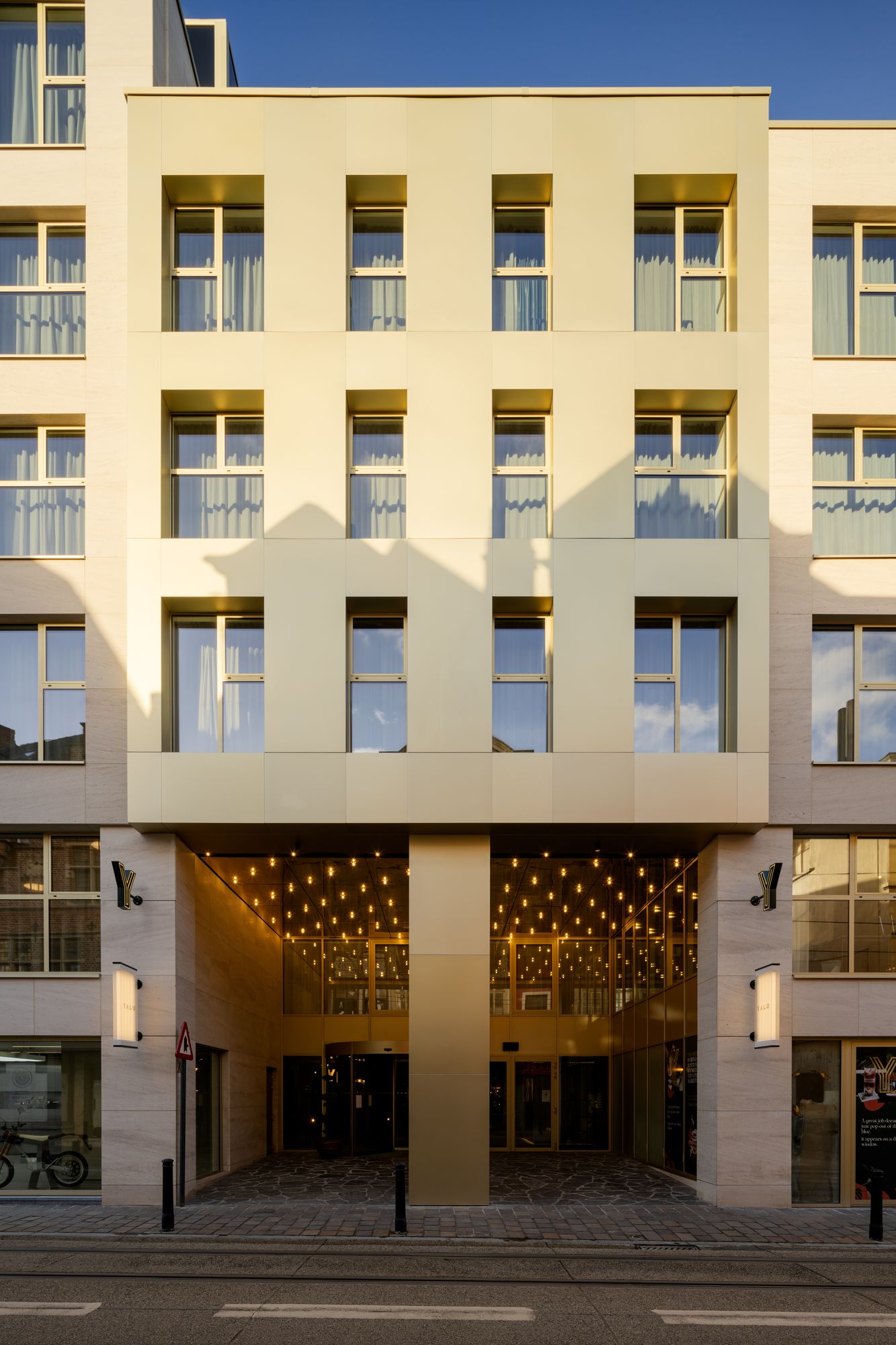