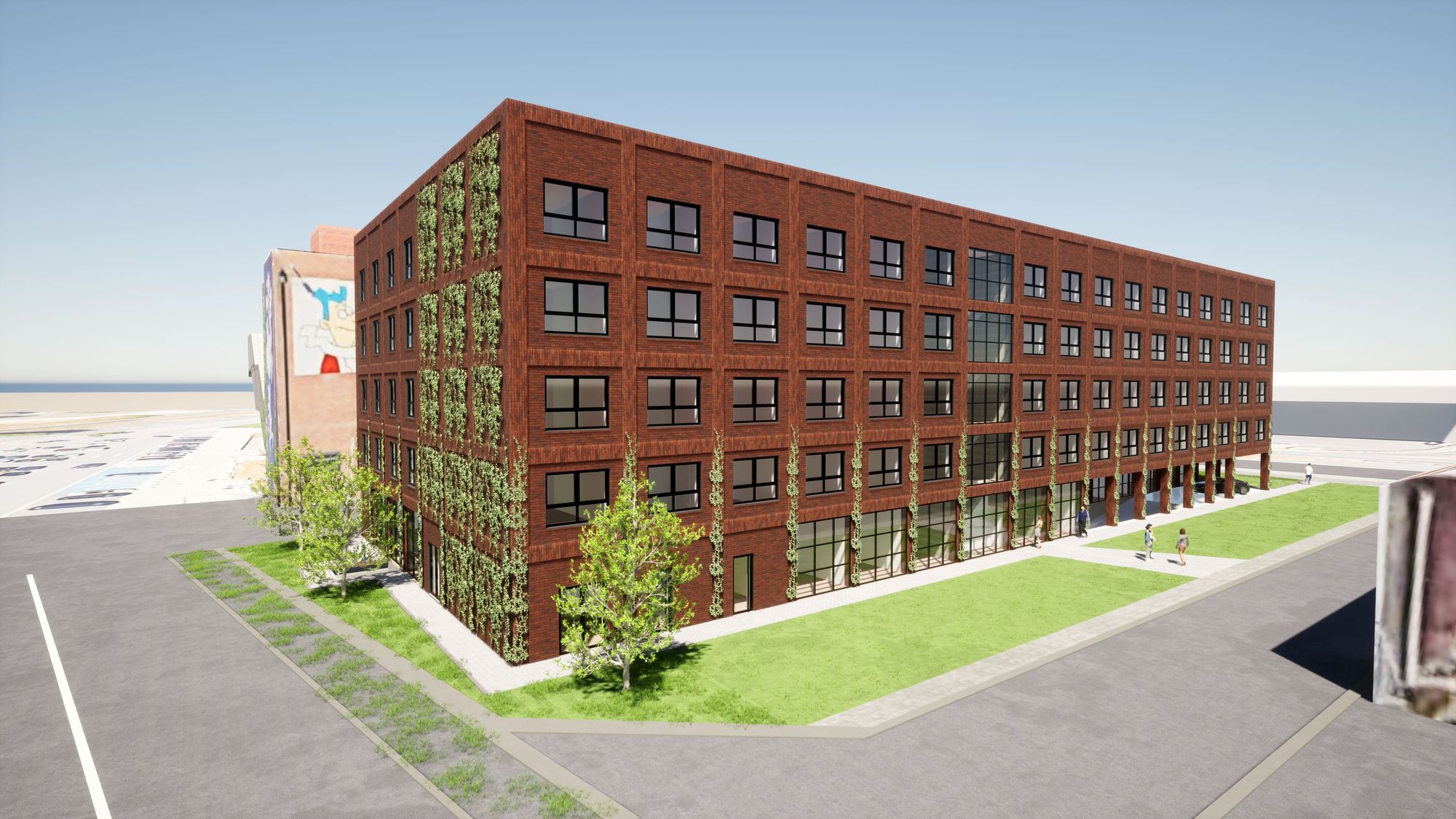 The existing building, which currently houses a car body shop, is to be demolished and replaced by a new build hotel with 161 rooms, of which 97 are intended for short stays and 64 as extended stay accommodation, with a 2-storey underground car park.

The project site is located on the northern edge of Ghent, to the south of the city’s port.
The immediate surroundings are characterised by important arterial roads with both industrial and retail activity. Neighbouring lots are occupied by a Weba furniture shop and sporting goods retailer Decathlon.

The positioning of the new building takes these surroundings into account. The spatial plan aims to create a continuous facade along Vliegtuiglaan. A decision was made to have the new hotel’s dimensions align with the Weba building. The hotel’s facade cladding and architectural style are designed in harmony with its surroundings.

The shape of the building and its precise positioning on the lot were determined primarily by limitations due to the necessity to add an escape route, permitted development restrictions and the rear neighbour’s right to light. This results in the building being positioned to the rear of the lot, allowing for a certain amount of openness towards the street. The restaurant and some of the rooms open onto a patio located at the back.

The building’s appearance is intended to recall red brick industrial warehouses, in a cleaner, more modern incarnation. The rhythmic placement of the hotel’s windows, dictated by the rooms’ positioning, is perfectly suited to this style. This look also allows the building to fit in well with the neighbouring Weba building and the industrial nature of the port area.

The hotel’s ground level is characterised by various facilities such as a lounge, reception area, back office, waste disposal, restaurant, sanitary facilities, a breakfast area and bike storage. In addition to these facilities, the ground level also features five hotel rooms. The first through fourth storeys each contain 16 extended stay accommodations and 23 rooms for short stays. 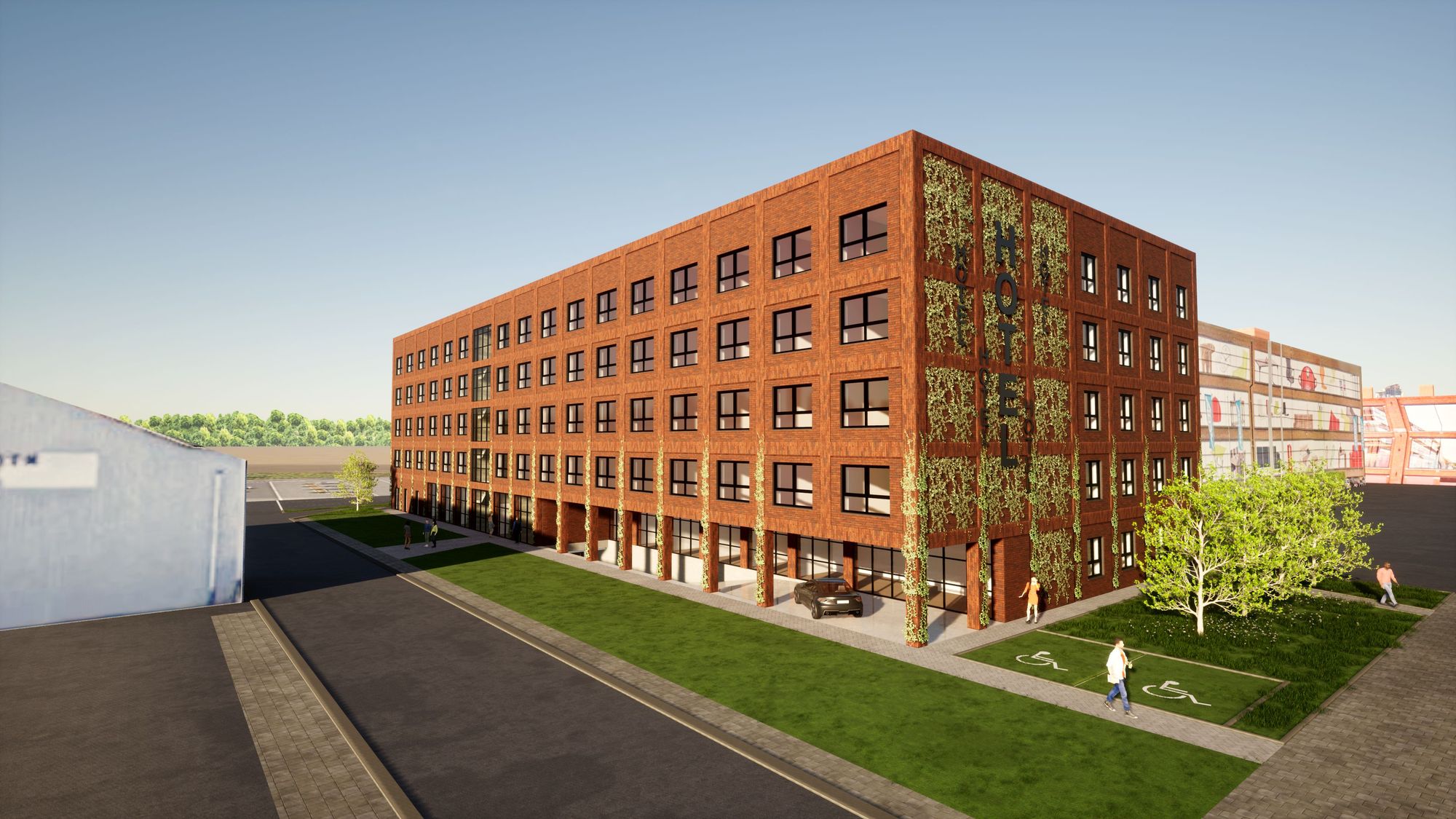 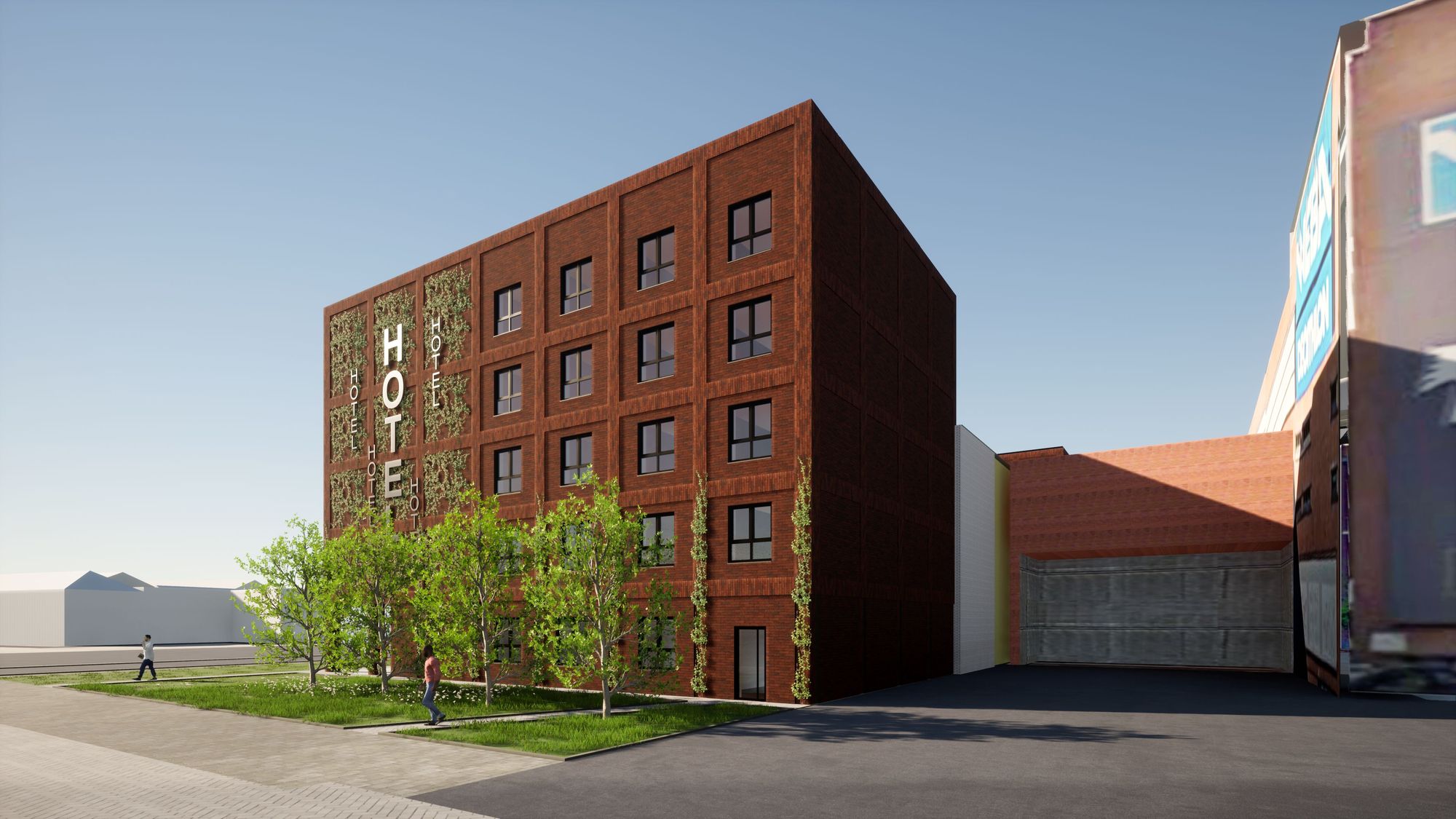 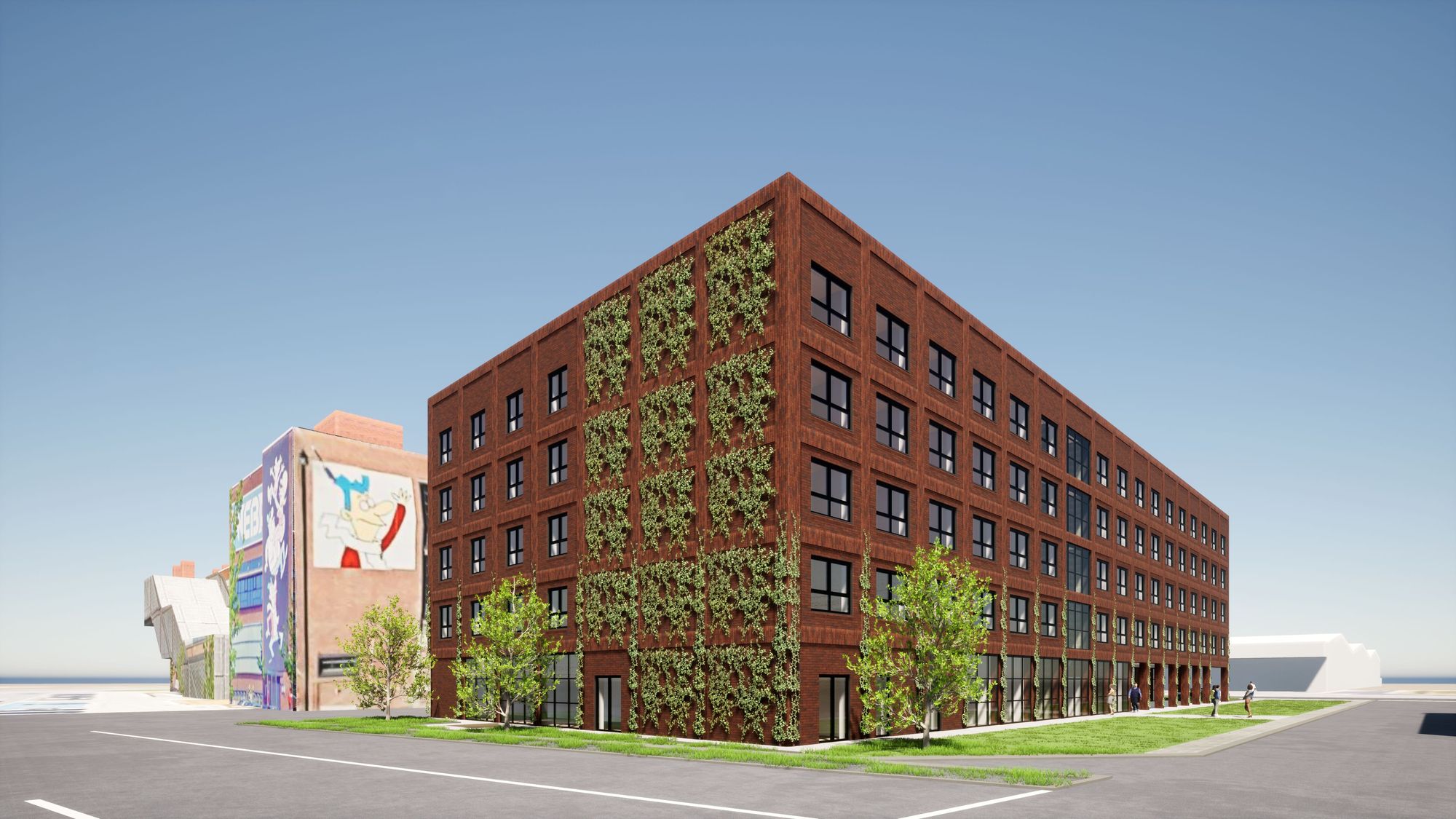 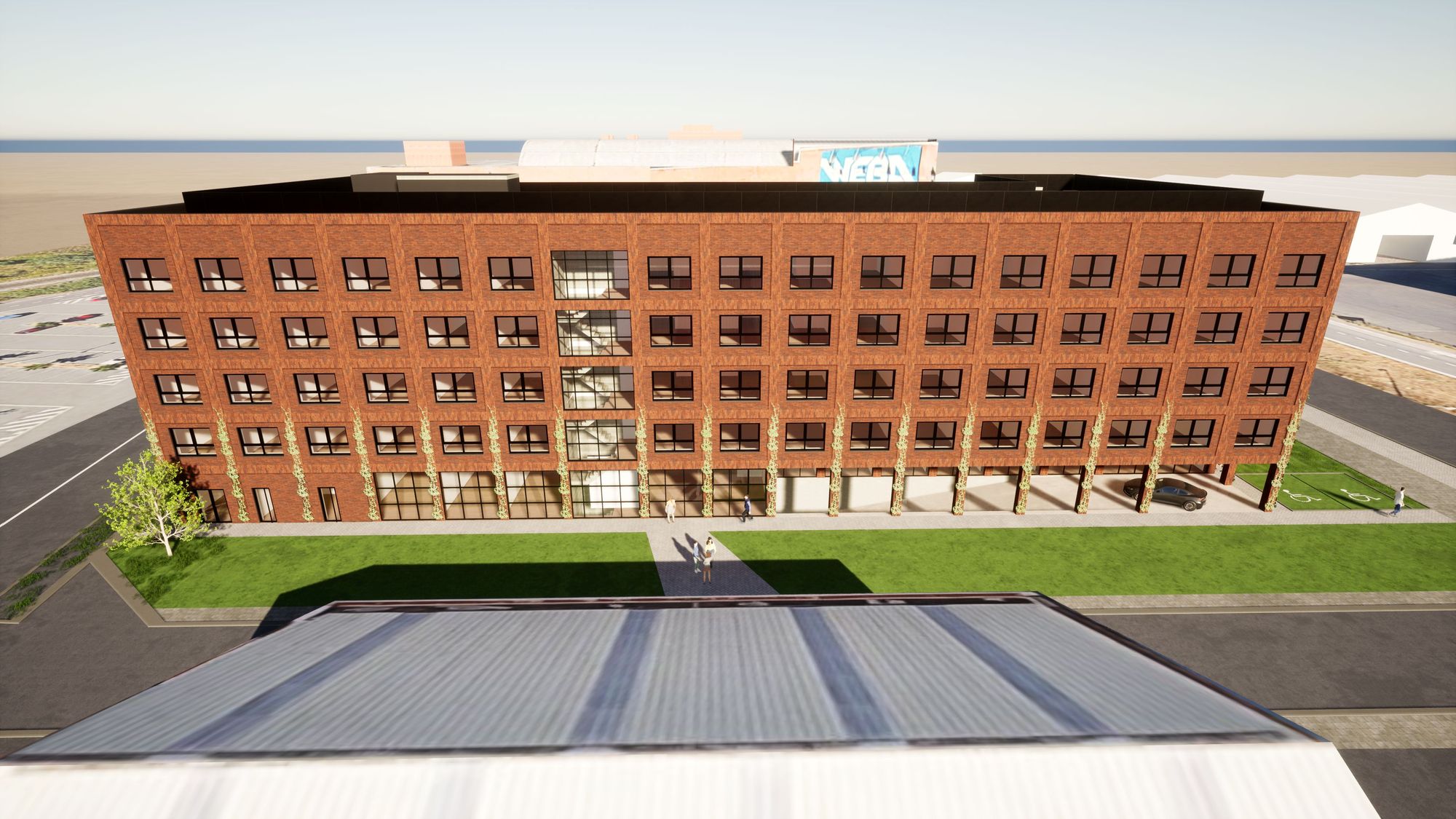