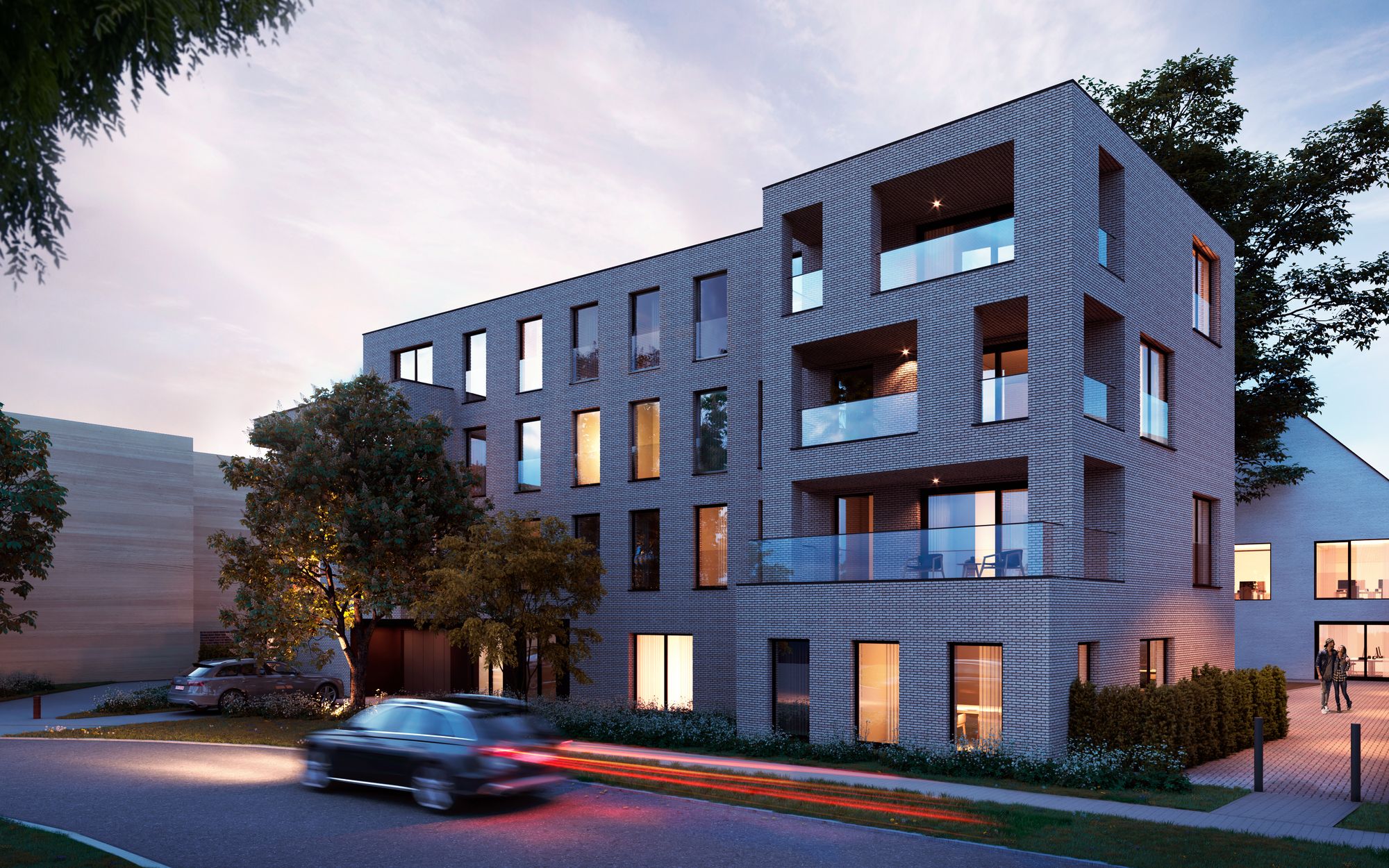 The Espark Residence project comprises the renovation of an existing warehouse in an enclosed inner area and the construction of a multi-family dwelling with 14 flats along Vlasgaardstraat. In addition to a communal underground car park under the multi-family dwelling, the project also involves the construction of outer areas with a mix of water-permeable paving and green areas.

The communal underground car park has 14 spaces, including one parking space for people with disabilities. Nine of the 14 spaces are to be used by the occupants of the multi-family dwelling. The remaining five are reserved by the users of the offices. There are two storages and a number of technical rooms in the cellar. 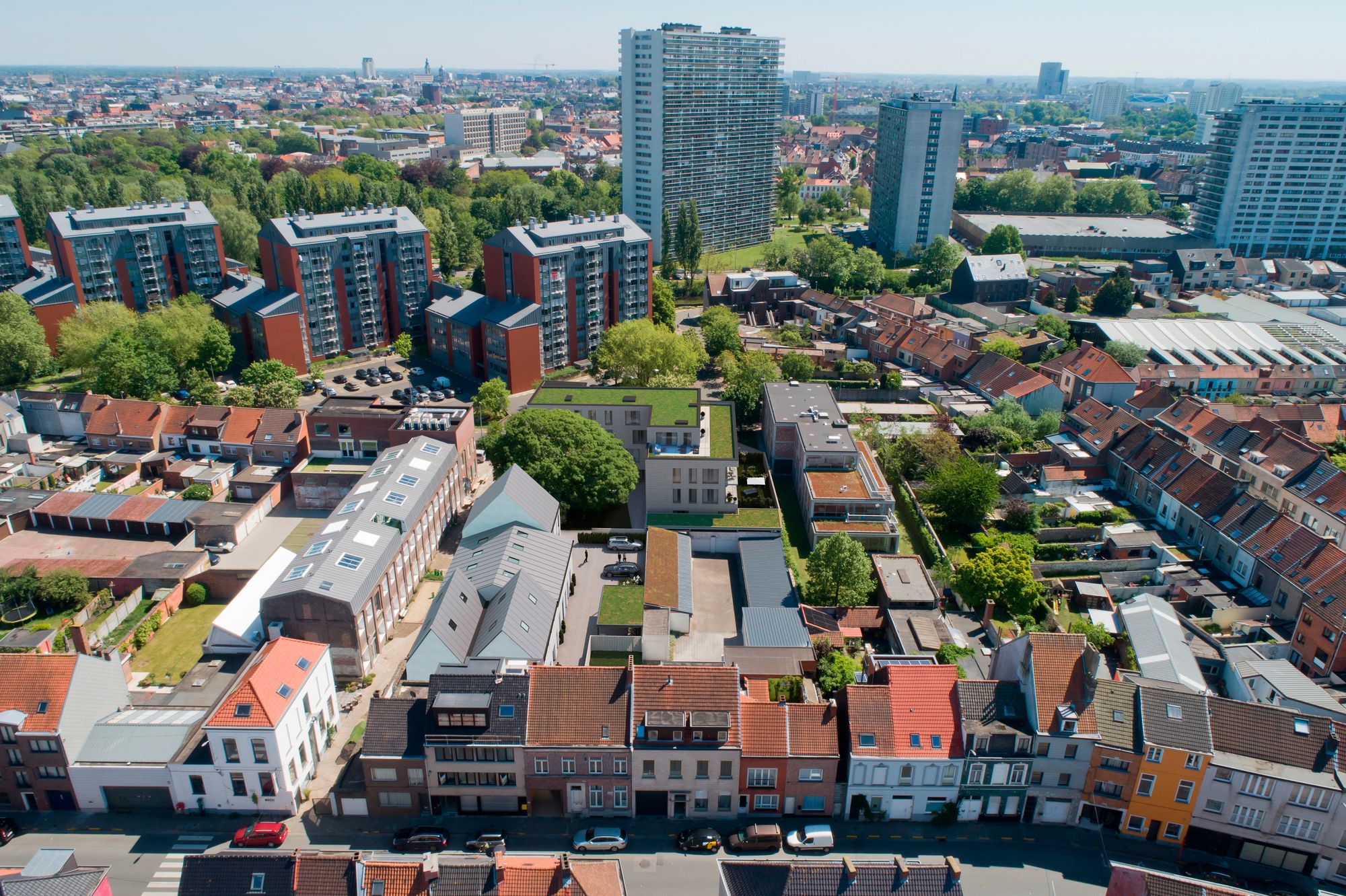 We will open up the site by demolishing existing structures without any historic or aesthetic value and by giving the position of the new volume a lot of thought.
The existing warehouse will be renovated in line with its new economic function (office space). This renovation requires a limited intervention on the outside of the building. The interior, however, will be fully renovated to create a powerful space.

The partly-painted brick façades will be preserved and will be returned to their original state with sandblasting.
The existing openings are maintained, enlarged or bricked up, depending on the situation. A number of new openings will be created to let in sufficient light. The position of these new openings and the enlarged existing windows has been chosen to respect the neighbours’ privacy and enhance the views and relationships with the inner area (tree). New windows will be installed and the entire building will be isolated behind the existing façades.

The multi-family dwelling will be situated between the existing tree and Vlasgaardstraat. The circumference of the canopy of the maple tree in the courtyard and the distance in relation to the two trees in Vlasgaardstraat thus serve as natural borders for the volume.

The existing warehouse (office space) and new-build (flats) will have separate addresses. The offices can be reached from Drongensesteenweg for the most part, while the flats can be accessed from Vlasgaardstraat. Pedestrians and cyclists will be able to move through the site, guaranteeing accessibility.

On the side of the existing warehouse, a covered and secure bicycle storage will be installed in the courtyard, as well as two unsecured bicycle parkings for visitors. The existing building will have four parking spaces and two covered parking spaces. These car parks can be accessed from the passage that extends from the small road that leads to Drongensesteenweg.

As a result of the volumes’ position, operation and function, two distinct zones will be created in the private outdoor space on the plot. Cars can use the passage between Drongensesteenweg and the opened up inner area to access the car parks in the courtyard. The largely car-free zone, meanwhile, is specifically intended to be used as a garden and bicycle storage, however.

A square will be built around the existing maple tree, to be used by the occupants of the multi-family dwelling. Cars cannot drive into this square, which will have a sufficiently large, unpaved zone around the tree as well as a paved area with water-permeable tiles. 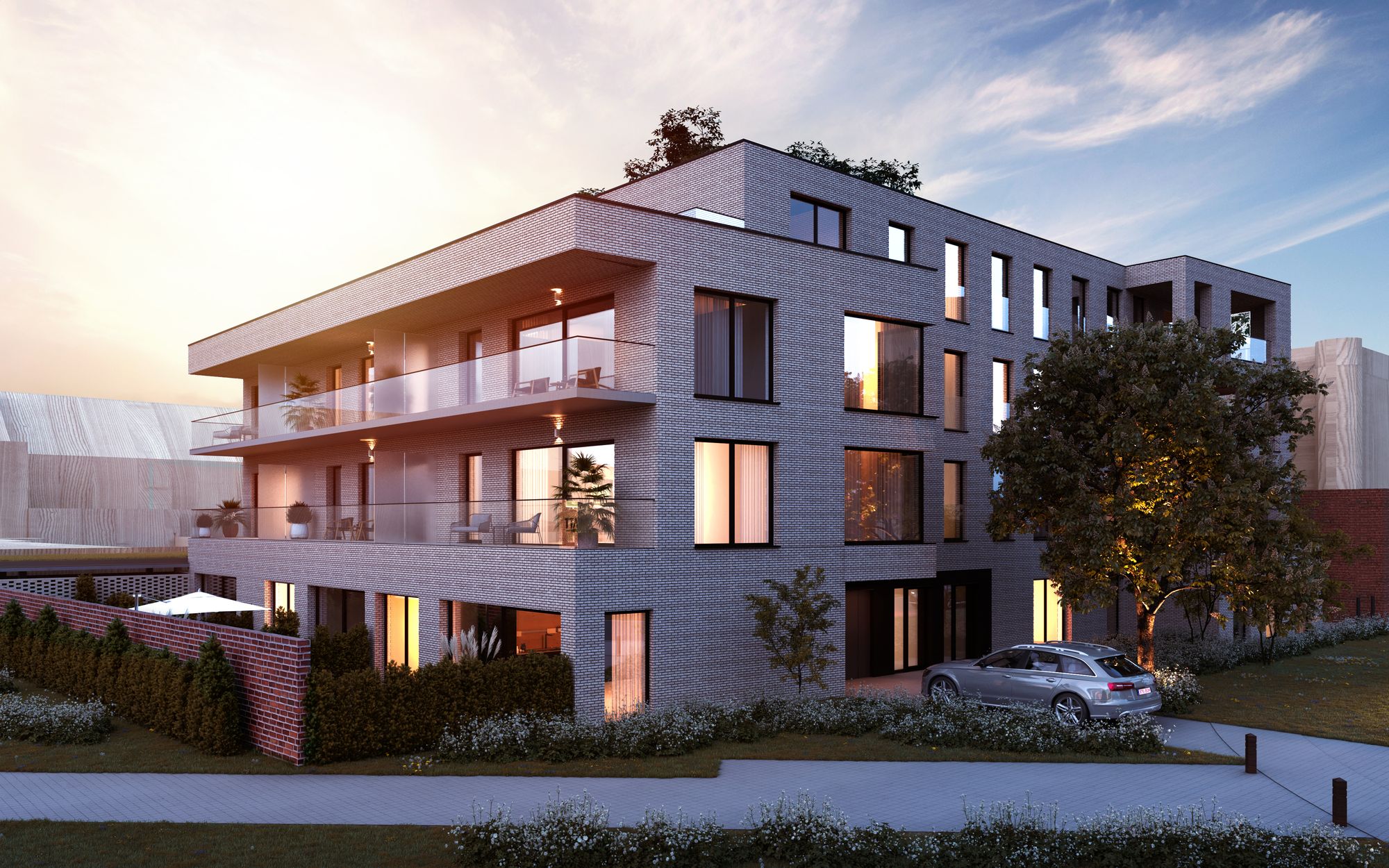 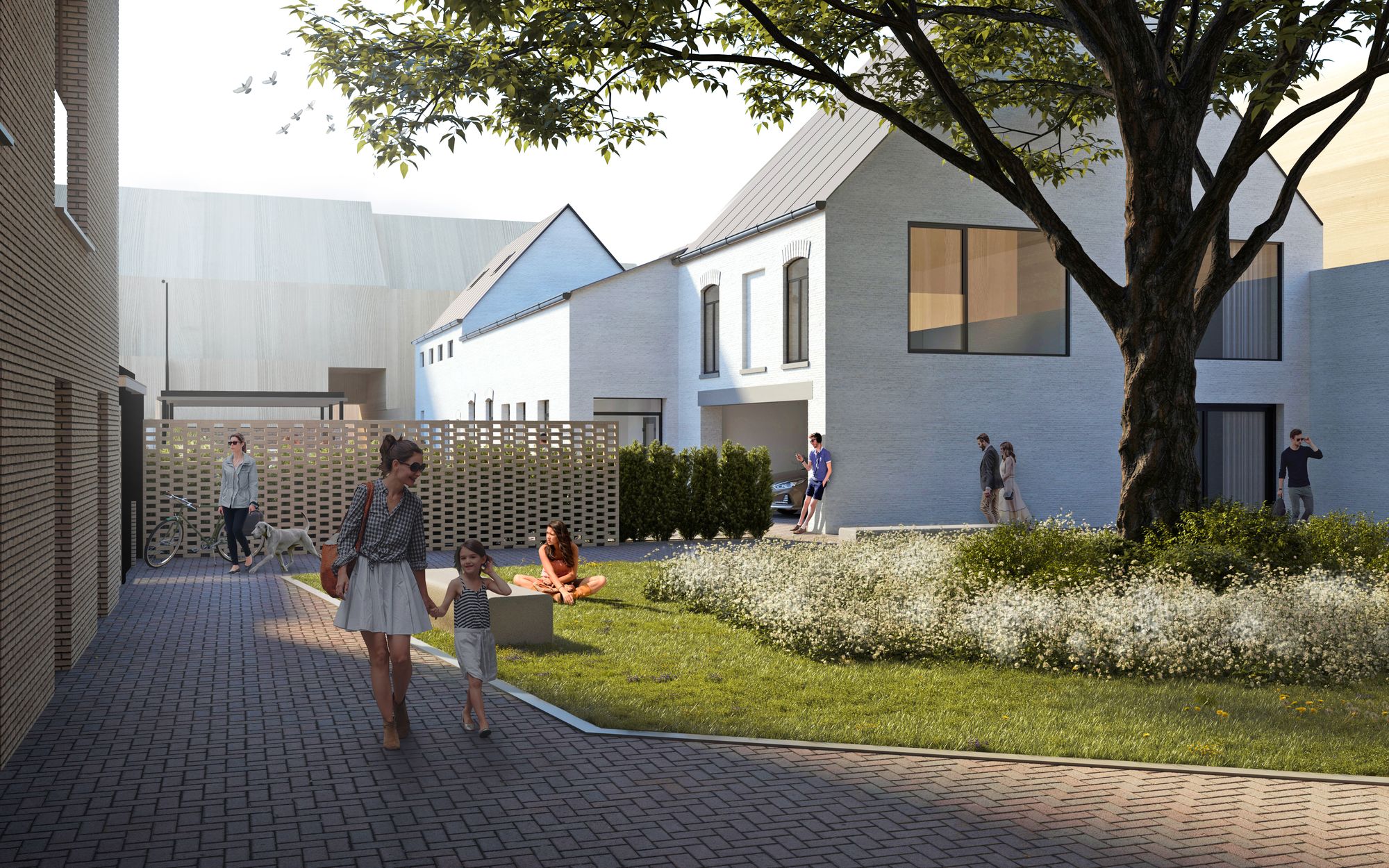 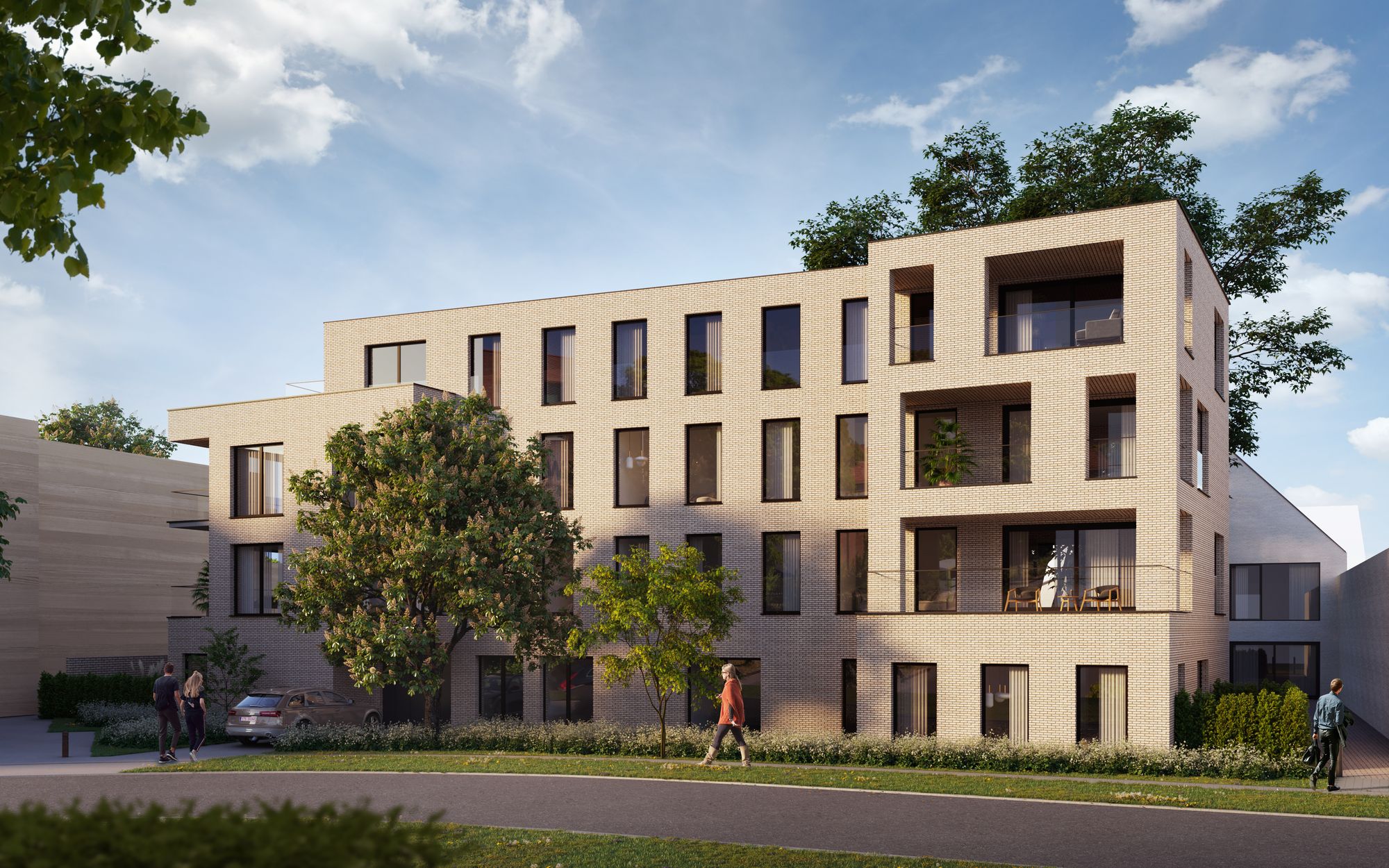 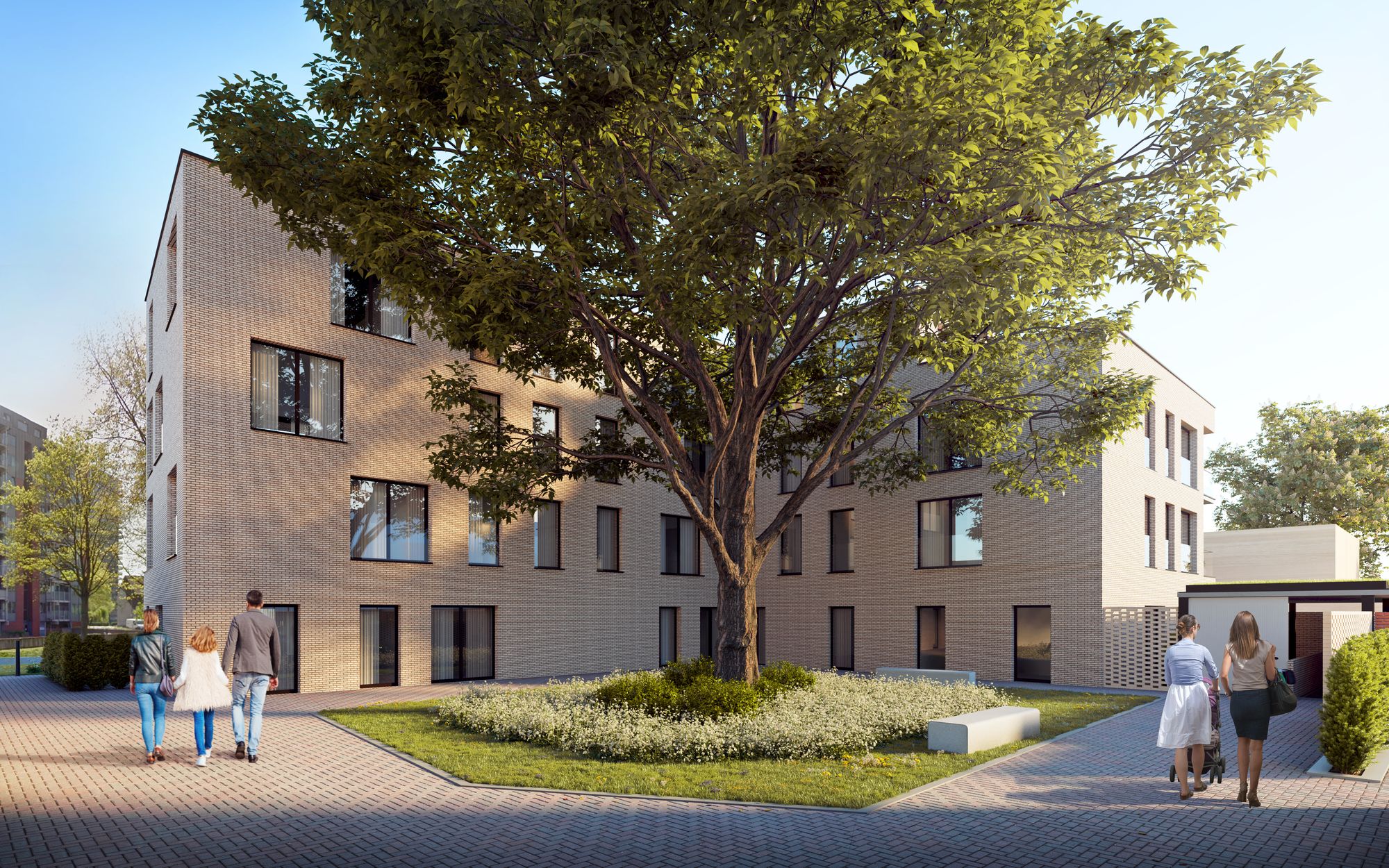