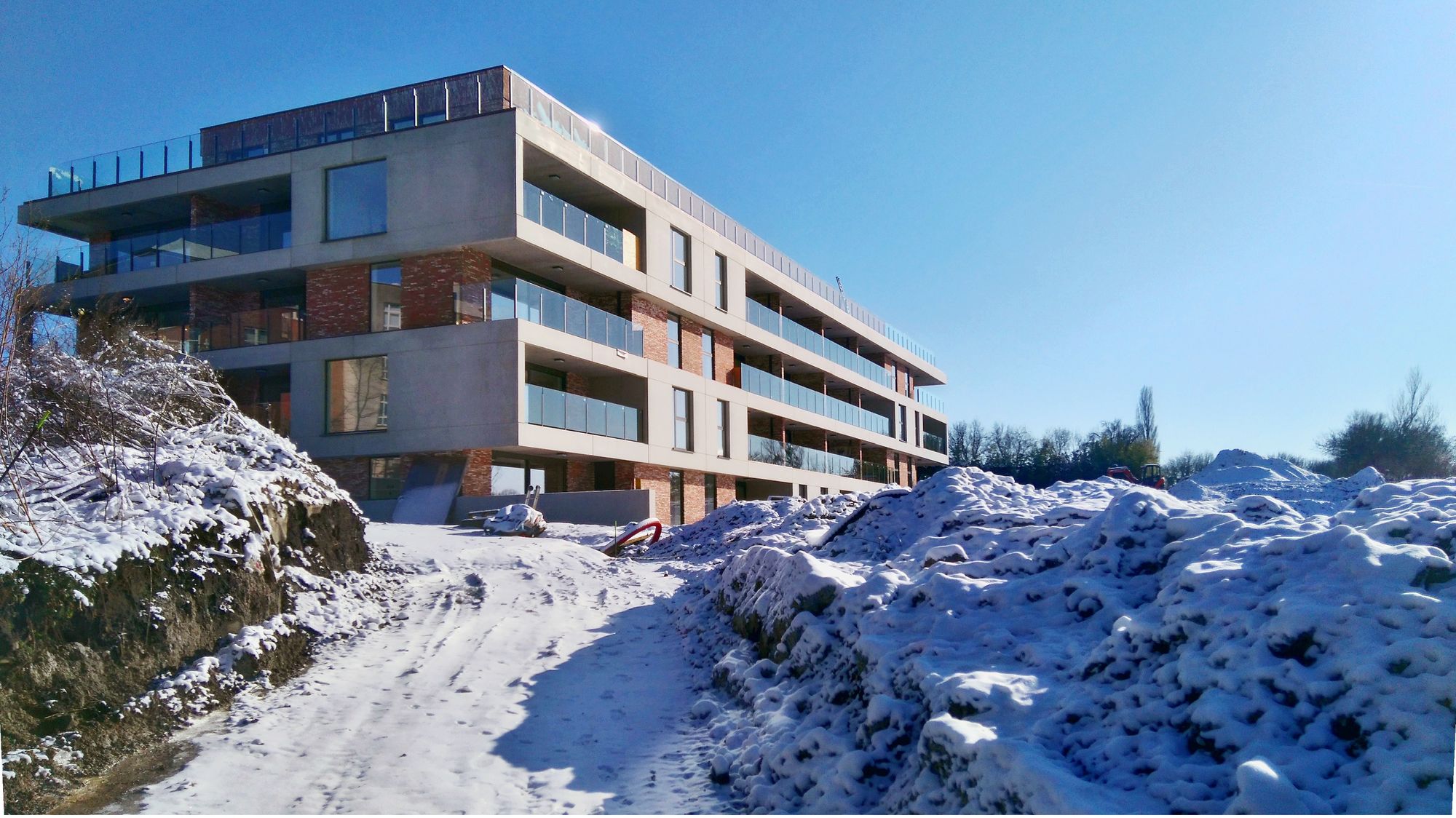 The Rand.9 project area is located along Hundelgemsesteenweg. Since the municipal boundary runs through the centre of the site, the project partially lies in the territory of Ghent and partially in the territory of Merelbeke. On the east and west sides the project area is bordered by, respectively, the Hundelgemsesteenweg and a towpath along the Scheldt. The site is laterally flanked by a cemetery on the southern side (Merelbeke) and a residential project on the northern side (Ghent).

The Rand.9 project area is located along Hundelgemsesteenweg. Since the municipal boundary runs through the centre of the site, the project partially lies in the territory of Ghent and partially in the territory of Merelbeke. On the east and west sides the project area is bordered by, respectively, the Hundelgemsesteenweg and a towpath along the Scheldt.

The site is laterally flanked by a cemetery on the southern side (Merelbeke) and a residential project on the northern side (Ghent).

On the street-side (Ghent territory) a building is planned to fill the gap between the two existing buildings, and will also serve as a gateway with a wide, two-story underpass. This building offers seven residential units and has a cornice height along the street side of four entire floors. The building has a gross floor surface area of 687 m².

At the rear a second detached building is planned parallel to the Steenweg and the Scheldt behind it, consisting of twelve residential units on the territory of Merelbeke and 23 residential units on Ghent’s territory. The building has three floors, a retracted roof level above street level of the Hundelgemsesteenweg and an additional underground level. The lowest level will be used as an underground car park on the street side, while on the Scheldt side it will comprise residential units. The building is consistent with the permitted site profile (according to Merelbeke building regulations SIP No. 11).

The central building (GFA 3,844 m³) is characterised by its length combined with a terrace façade facing the Scheldt. To avoid the architecture being static the decision was made to focus on designing equivalent front, rear and lateral façades. On the one hand this was achieved through the core design of apartments benefitting from a front and rear façade, and through the interplay of two materials on the other: light grey decorative concrete and reddish-brown brick).

These two contrasting materials are alternated and form a dynamic that spans the four façades. This affords the volume a uniform character. On the street side the building is characterised in terms of its volume, by its function as a gatehouse. It proved impossible to perfectly align the cornice due to the different cornices of the adjacent buildings. This means the gatehouse forms an orderly building, with no receding level at the top. This improves its appearance in accordance with its role as a gatehouse and allows it to fit seamlessly between the buildings either side.

The façade of this smaller building is constructed from the same materials but they are applied in a different way than in the central building. The façade consists predominantly of brick; use of the decorative concrete is reserved for several accents: projecting terraces, façade surfaces of the underpass and a continuous windowsill. In keeping with the rearmost building the preference here was also for a horizontal section featuring slightly protruding façade masonry. This provides a subtle nod to the building behind it.

The design strived for the individual quality of the entities and a varied range of residential units. This project succeeded in creating a good mix of studios, one, two and three-bedroom apartments. It was possible to provide the larger units with a garden or large terrace. A flexible design also served as the foundation in which the option of merging two small units to produce a large one was integrated in the basic concept.

In addition the design includes a traversable green area, which occupies a central location between the buildings to be constructed and the Scheldt. The creation of this new cross-link for cyclists between the Hundelgemsesteenweg and the towpath reinforces this accessibility. Due to the central location of this green area, residents benefit from optimal enjoyment of the quality of life the greenery provides. All the apartments benefit from a view of this green space, which allows effective social control.

The required number of parking spaces (fifty) will be available, forty of which will be housed in the underground car park and ten at ground level. The parking ratios applied for Ghent and Merelbeke are different (0.9 and 1.5 parking spaces per unit). No closed garages are available. 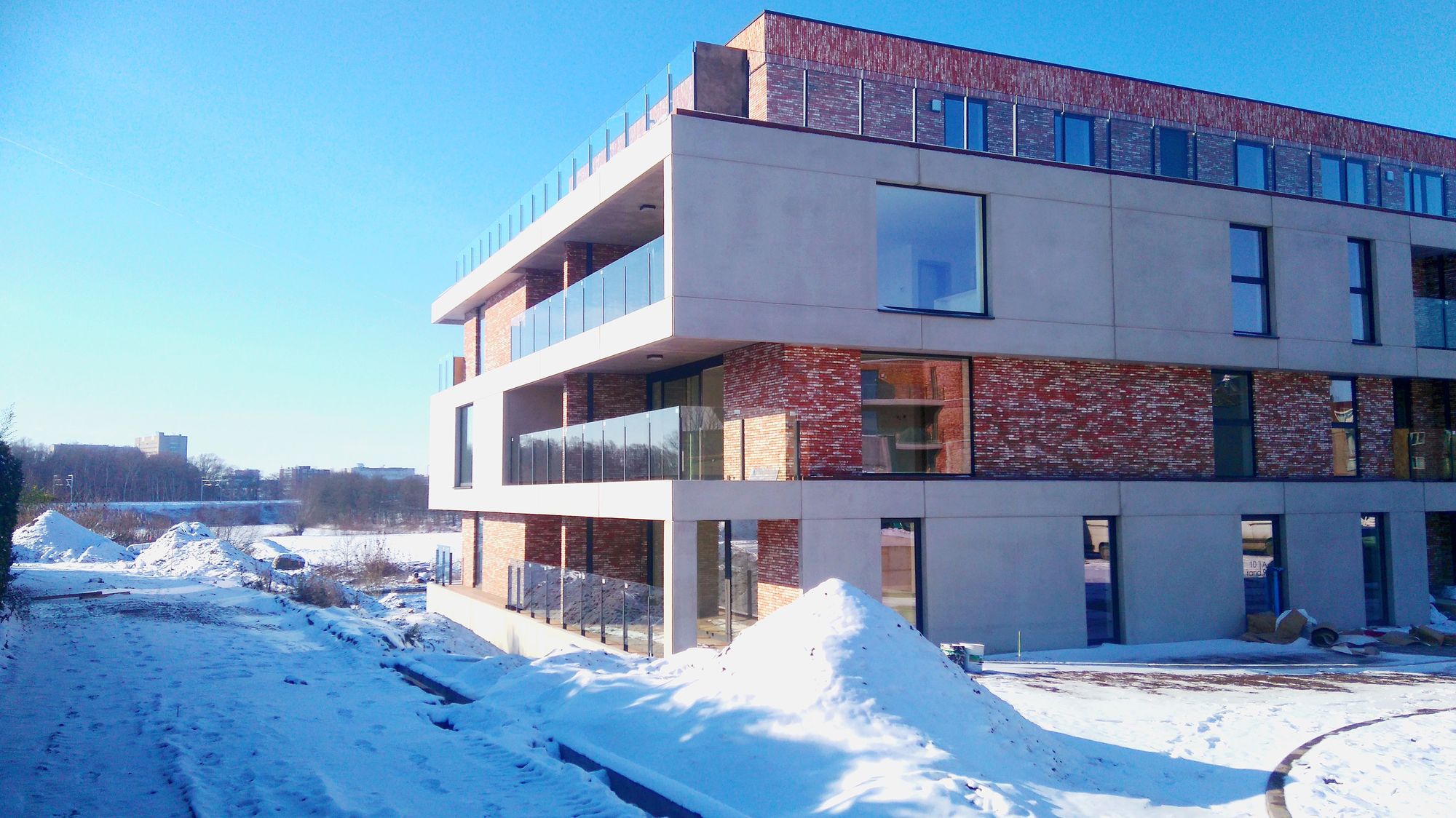 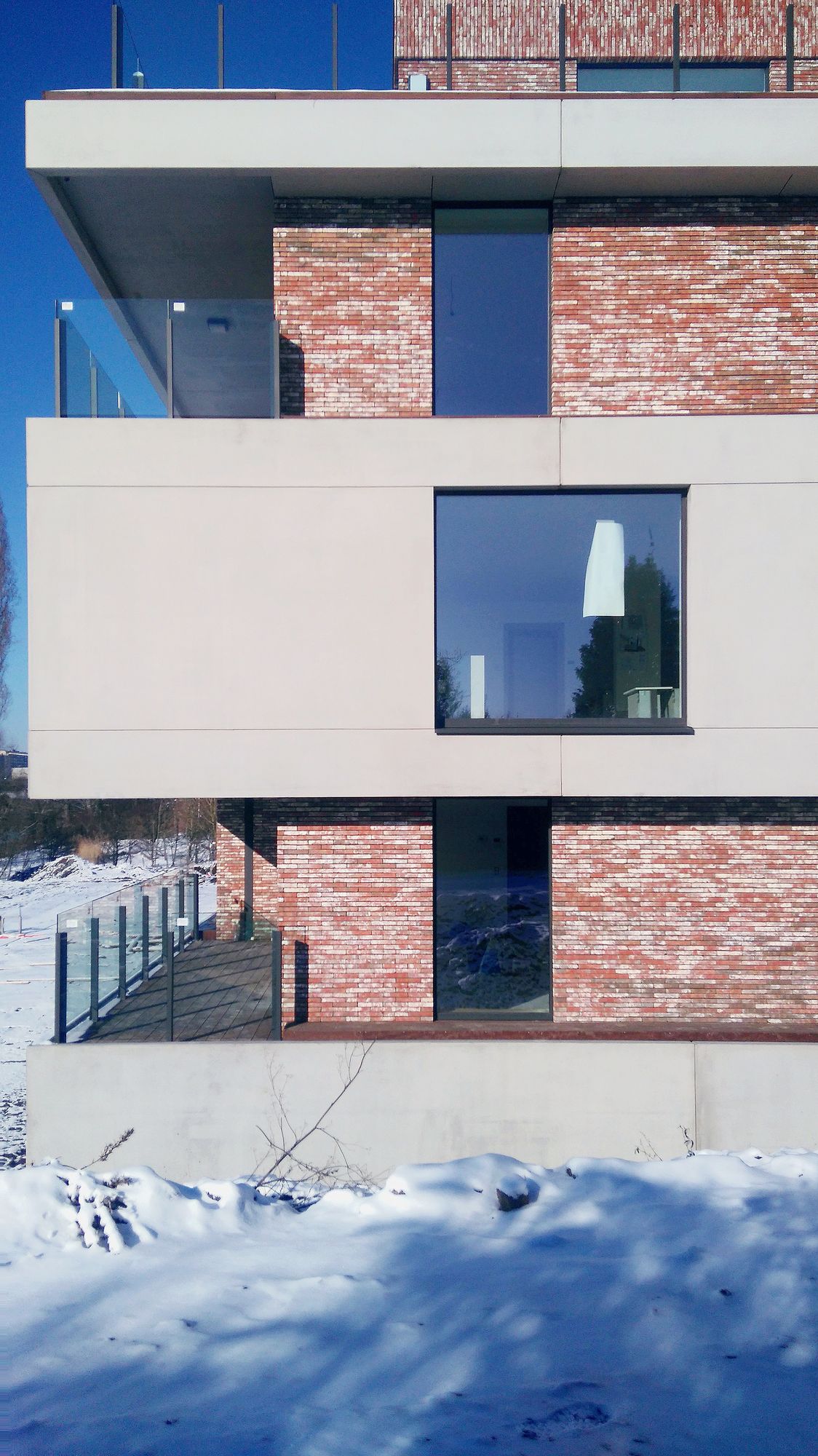 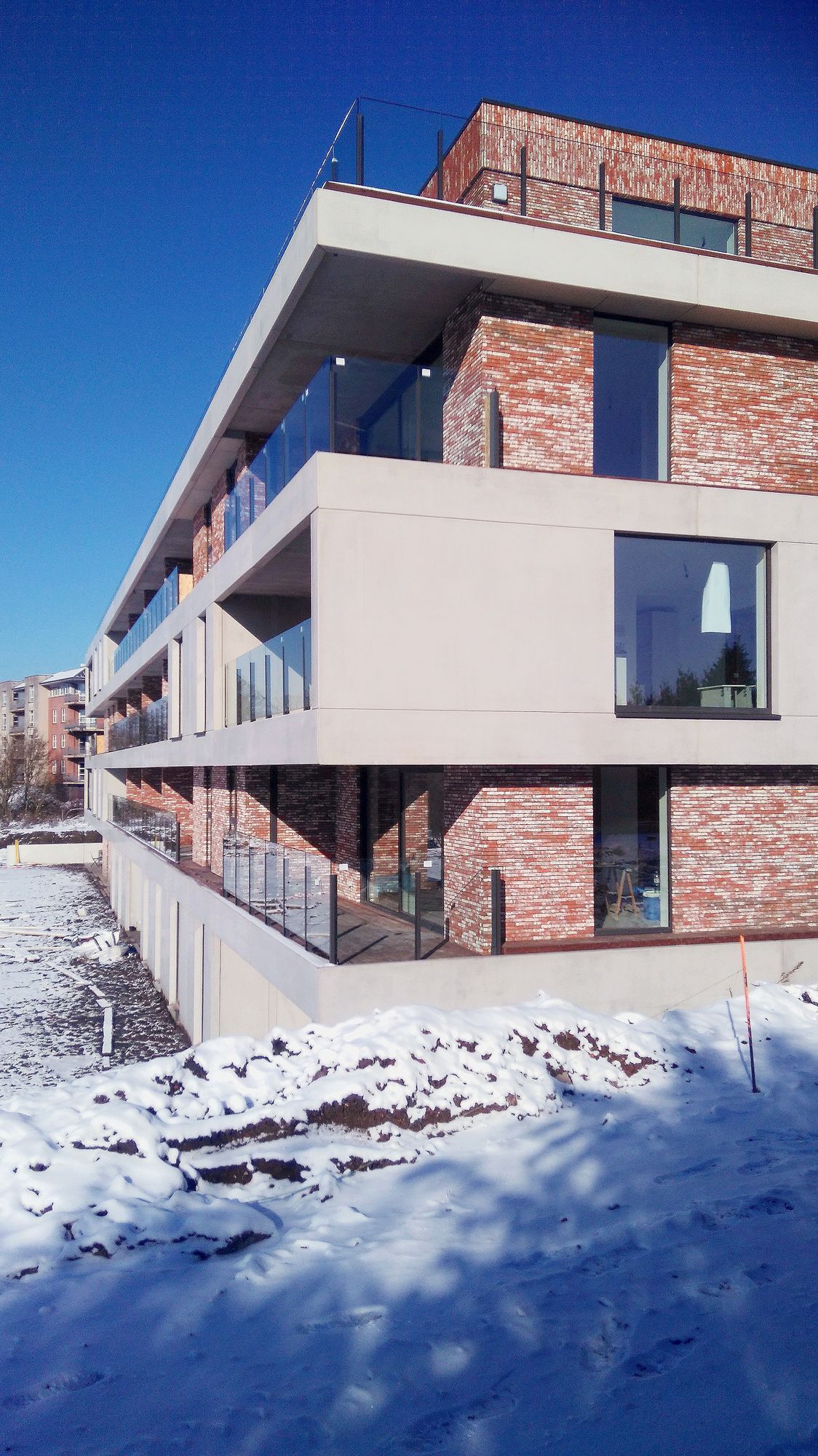 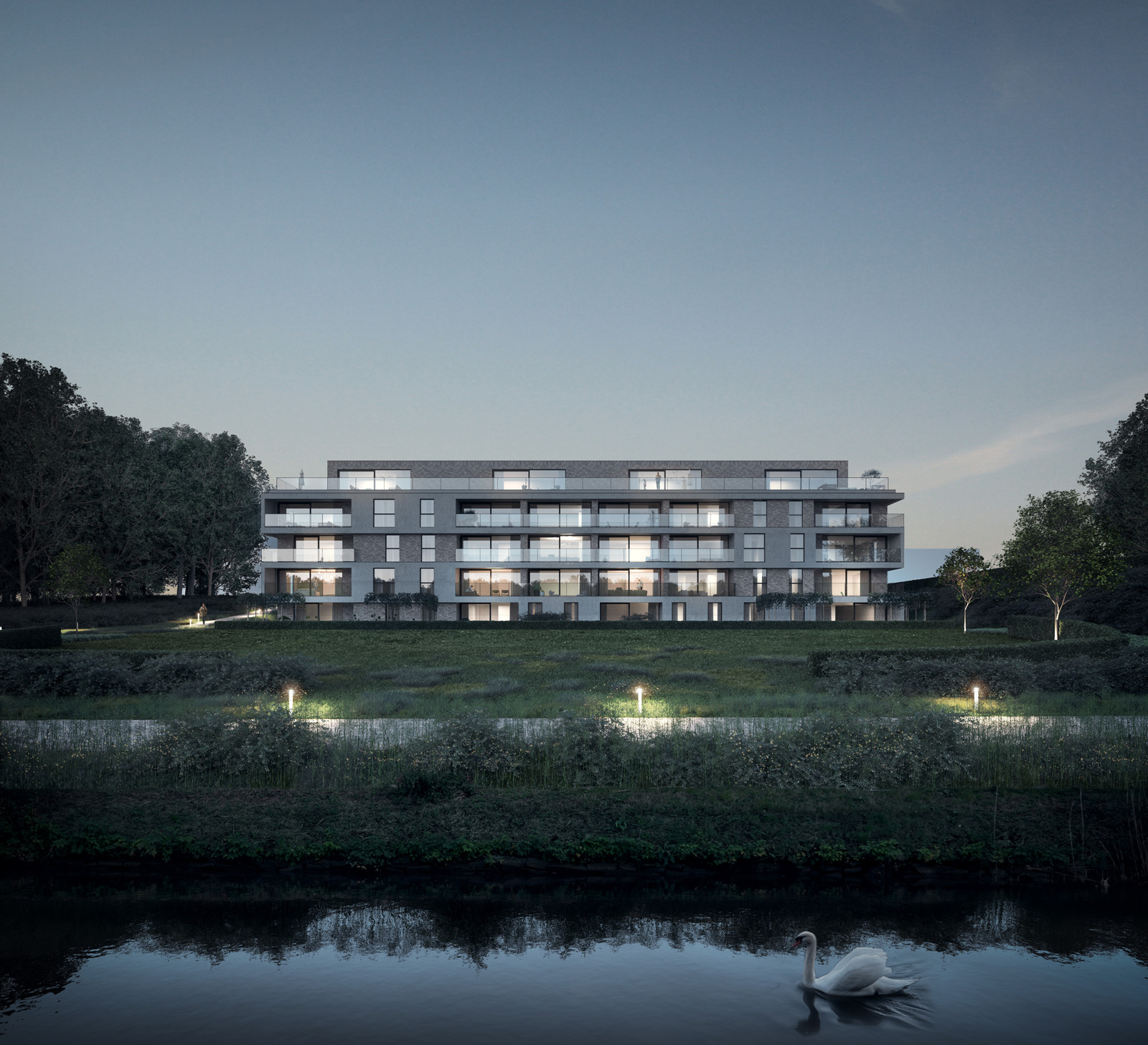