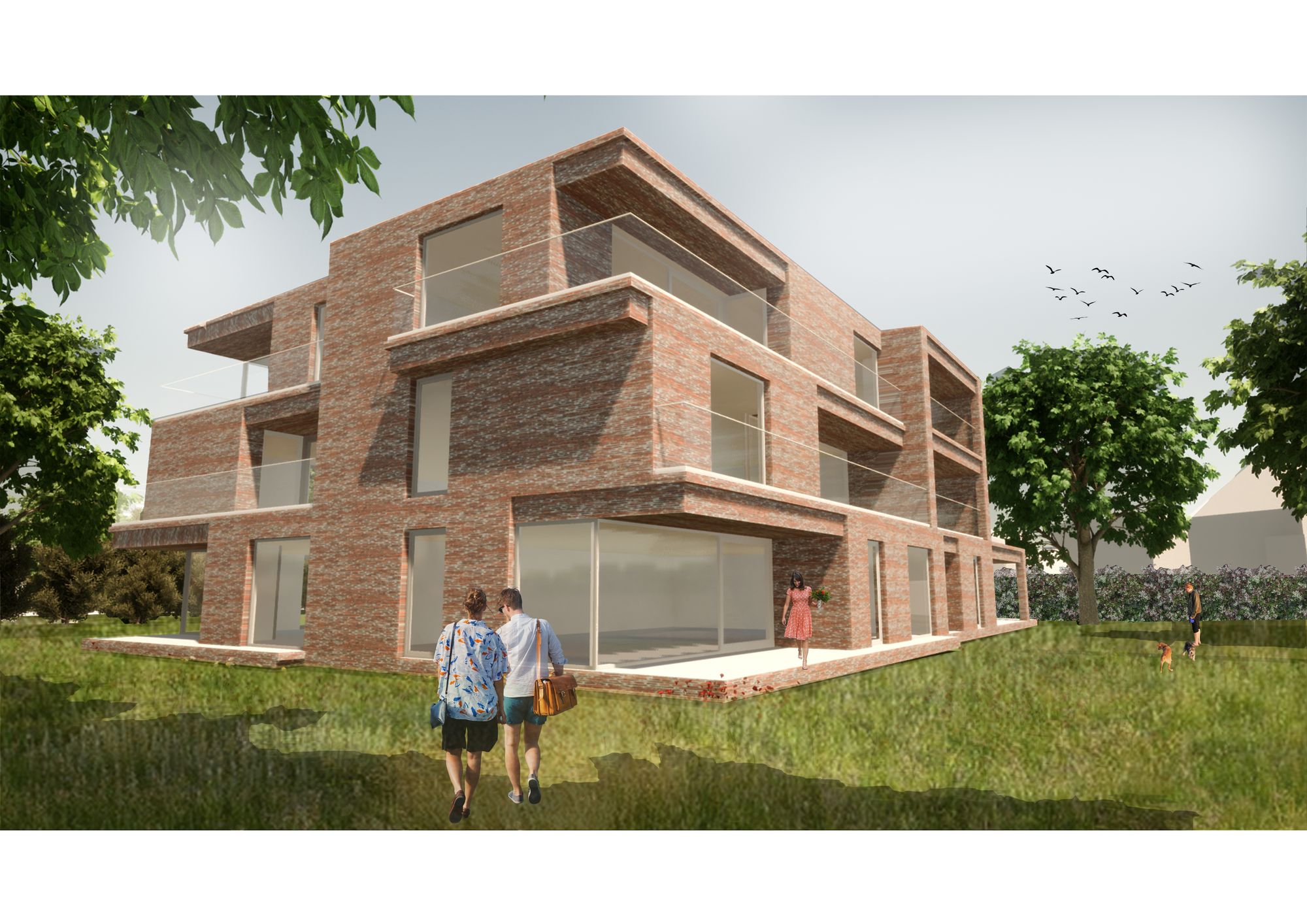 The site, with a surface area of approx. 5,385m² is located to the south of the Wetteren railway station district.

A building with the name ‘Green Point Avenue’, containing 14 residential units, will be erected along the street. The cornices of the building are staggered in height, moving from 3 to 4 storeys. This allows the building to fit in between the small-scale single-family residence to the right and the large-scale multiple-family dwelling to the left in a respectful manner. This building has an underground parking facility and a green roof with a ‘grasslands’ appeal.

A building with the name ‘Green Point Park’, featuring 11 residential units, will be erected in the ‘courtyard’ of the building complex. The cornices of this building will also be staggered in height, moving from 3 to 2 storeys. This enables the building to be respectfully situated among the gentle, fine-meshed texture afforded by the garden and the large-scale, more rigid texture of the retail facilities. Valuable greenery will be maintained and restored all around the building. The building will be situated in a ‘forestland’ atmosphere.

The central building is primarily characterised in terms of its structure by the subtle interplay between apertures (windows) and protrusions (outwards-fanning terraces). In contrast to its dynamic design, this building has a well-balanced appeal thanks to the harmony that has been achieved through the combination of primary materials (baked clay brick in natural shades of colour and glass). These materials, modulated identically in a mutual fashion, create a sense of rhythm that extends across all four surfaces of the façades. This equal treatment gives the structure an omni-directional appeal that is further reinforced by the varying orientations of the residential units. The wall-to-ceiling windows facing east are veiled by openwork partitions.

The same principles are applied in the north-eastern façade of the building parallel to the street (Green Point Avenue). This structure is placed in a deviating context and, above all, also has a different function. It is intended to serve as a unique link connecting the street and the courtyard area. All residential units have a sunny living room taking up an entire side of the unit, front to back, creating a uniform façade at the front (of bedrooms) and at the back (of patios). To prevent the architecture from becoming static, the principles of a harmonious use of materials are applied here as well with an identical modulation in terms of materials. A balance is created between contemporary and non-offensive traditional, timeless architecture through the use of light-coloured grey-white wirecut bricks, on the one hand, and light grey concrete lintels to create a striking detail, on the other hand. The lintels serve as a connecting link between the front, side and rear façades.

The principles of the harmonious use of materials to create two different atmospheres (woodland on the one hand, grassland on the other) result in two very different buildings that could nevertheless be construed as a brother and a sister thanks to their identical sense of rhythm.

A pleasant mix of 1, 2 and 3-bedroom apartments will be realised (20, 52 & 28%, respectively). The larger units will be provided with a larger outdoor area. The possibility of merging smaller units into a single larger unit has already been integrated into the basic concept.

The flexible design provides for a varying range of double and extended spaces. In addition, some storage spaces have been adapted to suit oversized bicycles. Electric charging points are available for both bicycles and cars; No motorised traffic is allowed on the courtyard area (except for priority vehicles).

The entrance to the underground car park will be reserved for the use of both cars and bicycles.

The garden will be landscaped in such a way to leave as much room as possible for biodiversity and to ensure a maximum preservation of the existing and valuable greenery. Raised areas will be provided on the roof of the underground garages to allow for taller solitary plants. Meandering strips of mowed grass will be created between these raised areas to provide access to the roof. Room for seating and socialising will be provided in these mown zones. In the central zone behind this, we will create slow paths through mowed grass. The grassland, which is located at a lower level, will serve as an open infiltration field. 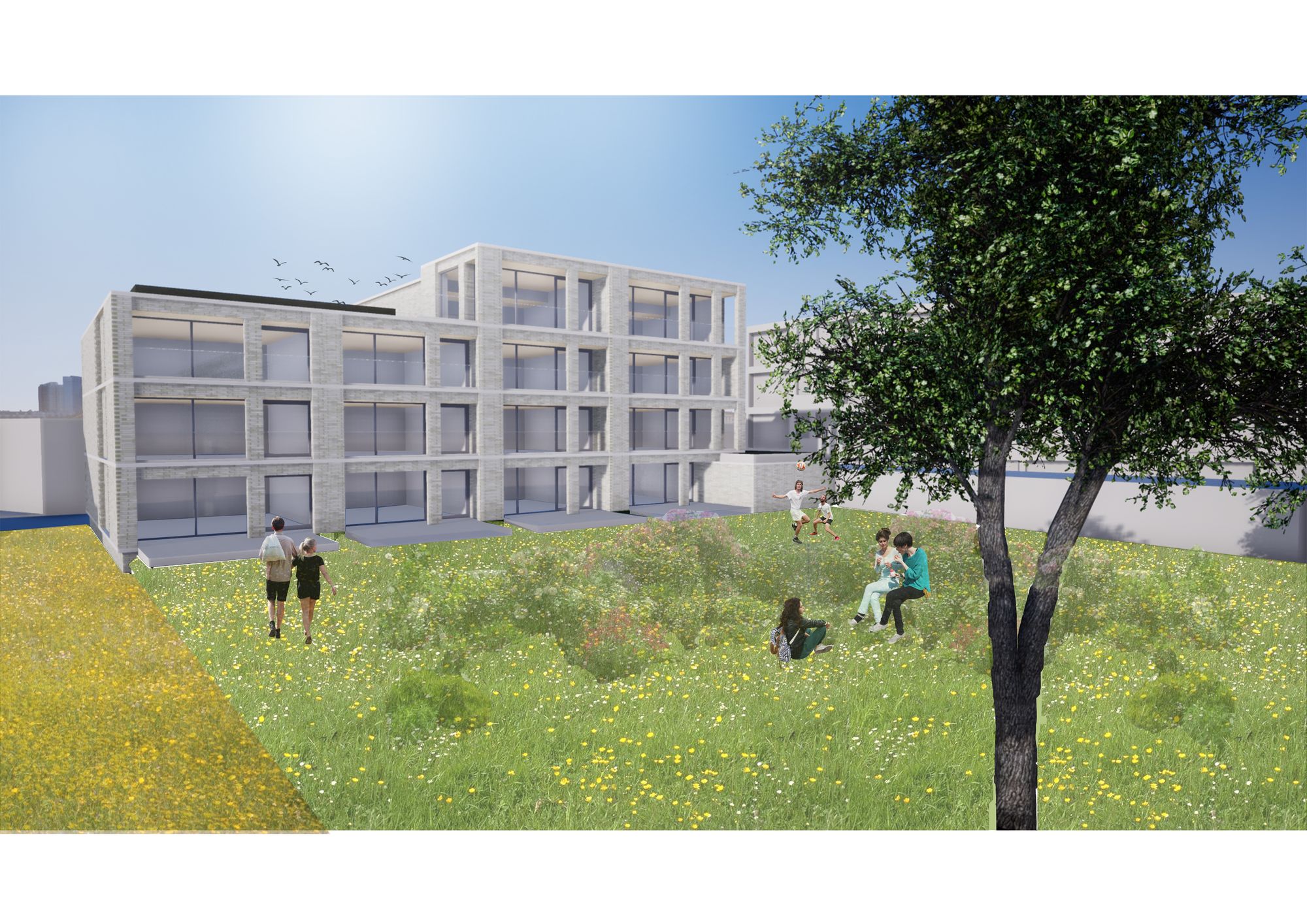 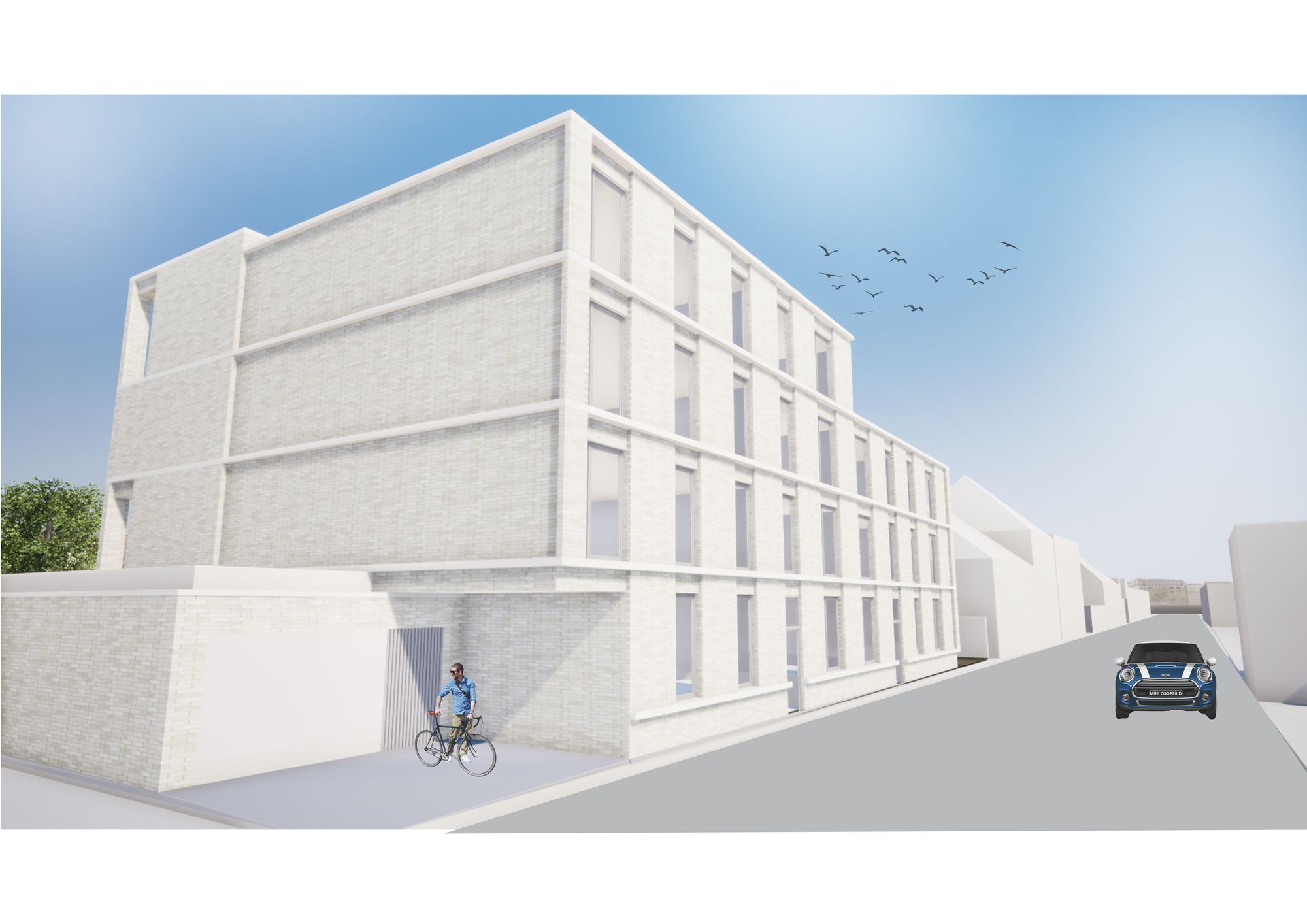 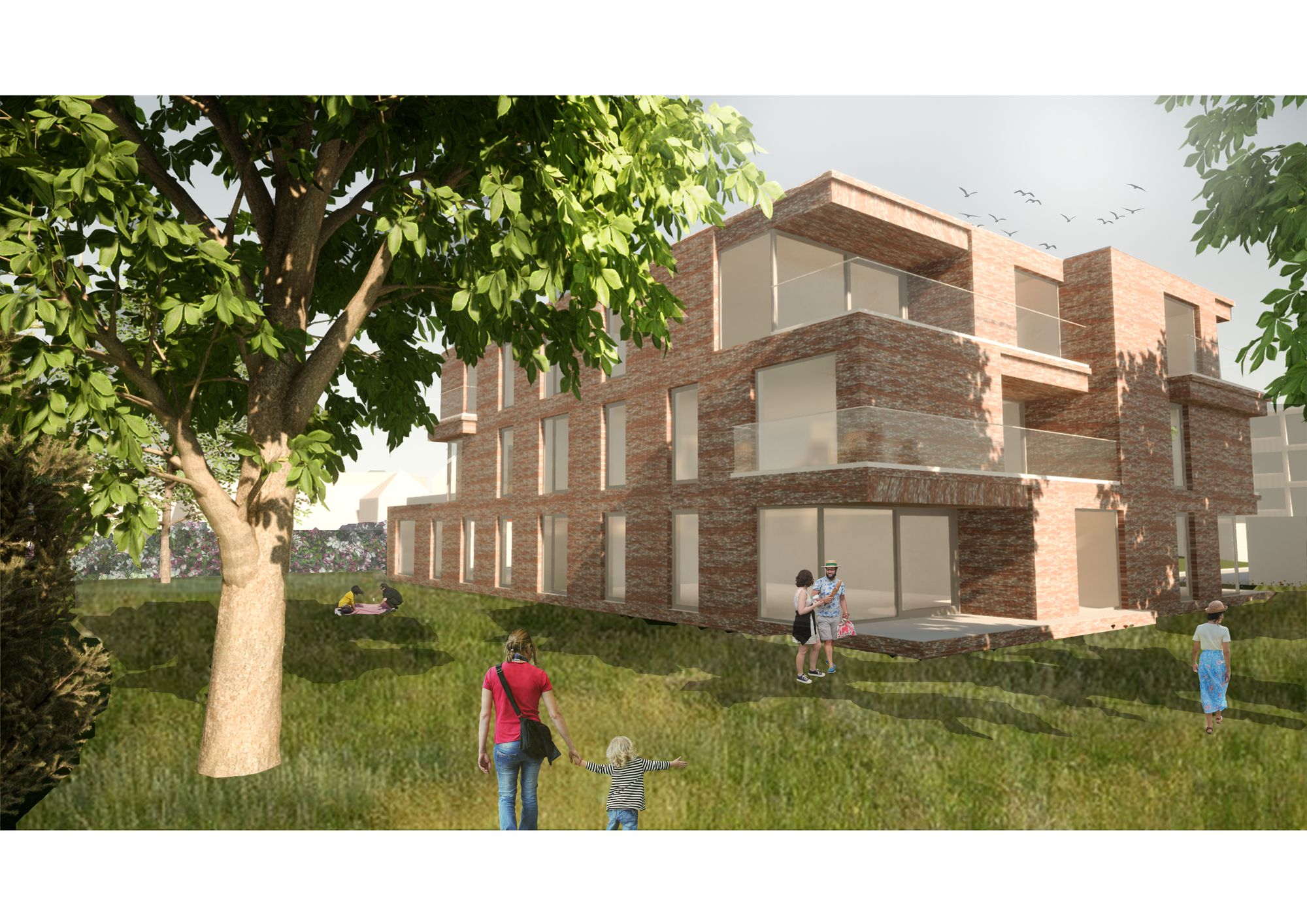 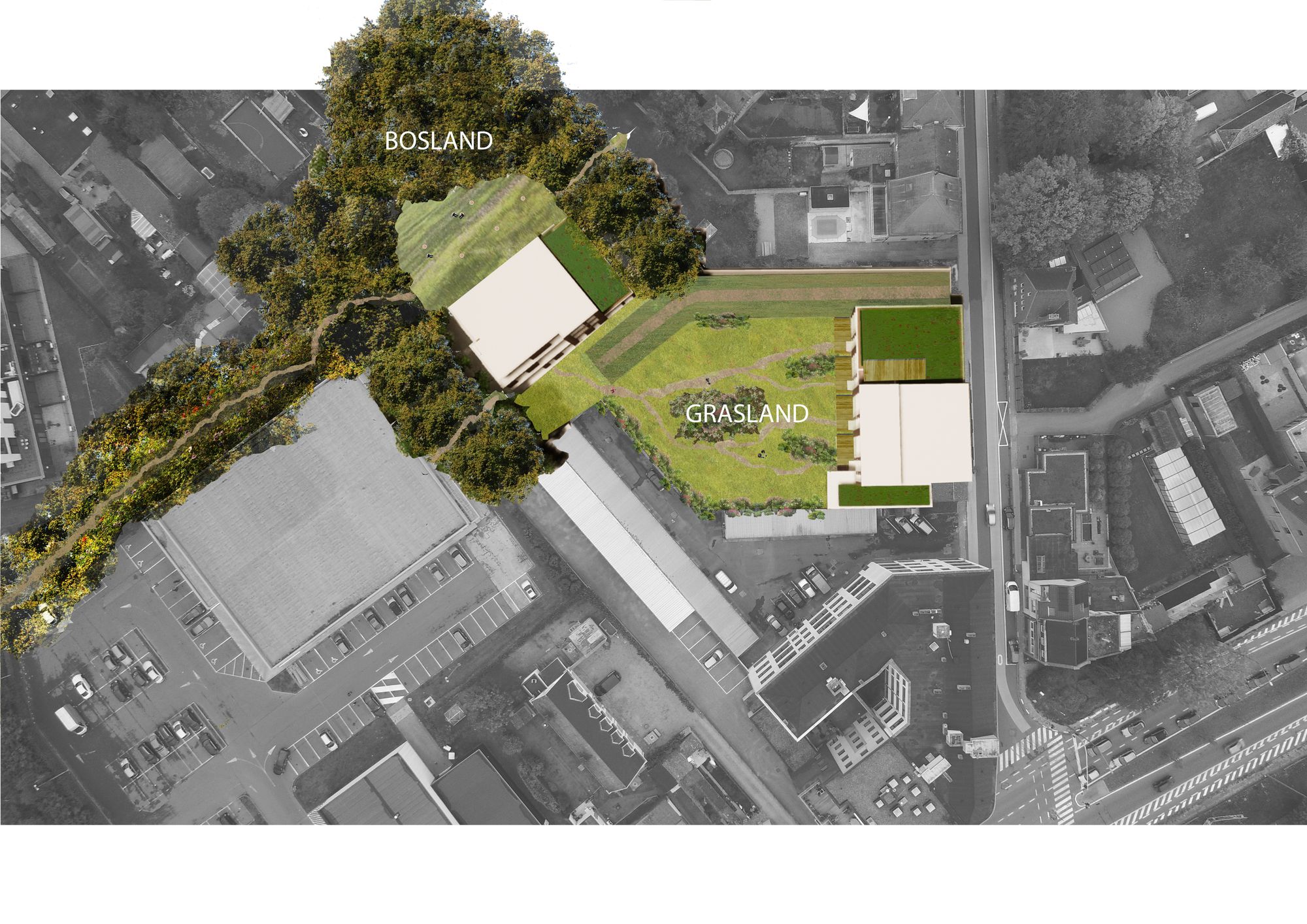